Vampire The Masquerade fans have been on a singular emotional rollercoaster over the past couple of years. A full decade and a half after 2004’s Bloodlines became a cult hit — popular due to the sheer depth of its world, story, and characters, and in spite of its many technical flaws — we learned that we were getting the sequel most had stopped daring to hope for.

As most people are now well aware, development on Bloodlines 2 has become mired in difficulties. Most recently, after multiple delays, the planned release date was pushed out of 2021 altogether; and developer Hardsuit Labs was pulled from the project, with publisher Paradox Interactive still to name their successor four months on. Fan enthusiasm for the project is now, understandably, far more cautious than it once was. However, members of the “vamily” were able to take comfort in the fact that it wasn’t the only game being worked on using the IP. 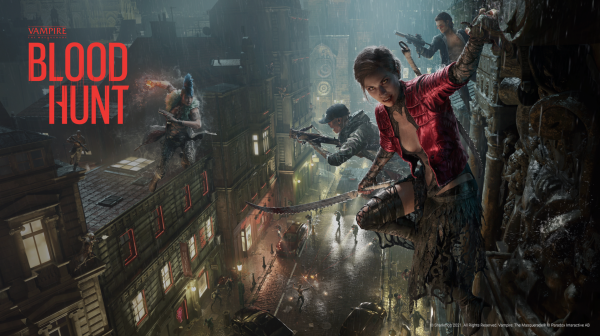 To be brutally honest, Bloodhunt sticks out among VTM’s recent and upcoming video game line-up, which otherwise consists of narrative RPGs and visual novels from developers including Draw Distance, Choice of Games, and Big Bad Wolf.

Despite featuring different gameplay styles, every other Vampire The Masquerade video game to date has been in a genre that allows for rich storytelling — fitting when the source material is a tabletop RPG which often favours slow-burning intrigue over fast-paced combat. A battle royale is… notably not that. Quite the opposite, some might say. 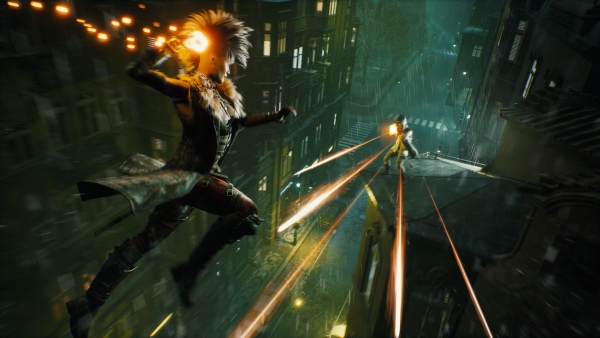 Last week I had the opportunity to play a few Bloodhunt matches for myself, as well as having a chat with several members of the development team at Sharkmob.

The first thing that struck me — and maybe came as more of a surprise than it should — was that the game really felt like Vampire The Masquerade. As someone who’s replayed the original Bloodlines almost yearly since its release and has a copy of the V5 tabletop sourcebook on my bedside table, I realised while wandering the midnight streets of Prague in Bloodhunt’s tutorial that the atmosphere was very familiar. 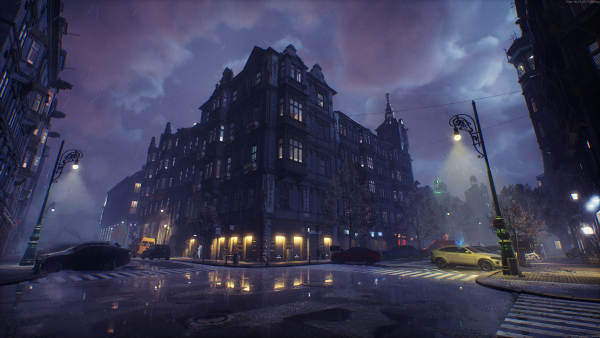 That turned out to be more than just good imitation. “We designed the look of our game in parallel with V5,” explained Martin Hultberg, the IP & Comms Director for Bloodhunt. “I think we influenced them as well as they influenced us.”

This extends beyond just the look and feel of the game, too. Although the pre-alpha build I played was mainly focussed on the battle royale mechanics, it’s clear that lore and storytelling has been given some growing space in the game as well.

“We started developing our game at the same time as they were finalising the latest edition of the core rulebook, so a lot of our stuff is actually part of the core meta-plot,” Hultberg continued. “We have our own very specific point in time, we have stories we are telling that are connected to the narrative […] Our stories and characters are very well integrated with the greater story of Vampire The Masquerade.”

During my hands-on time with the game, I was intrigued to discover that it features an extensive journal tab. As you uncover items and encounter characters in the game, journal entries fill in with relevant backstory. Much of this will be familiar to players who’ve been with VTM for a long time, but there’s plenty of new stuff for experienced players too. 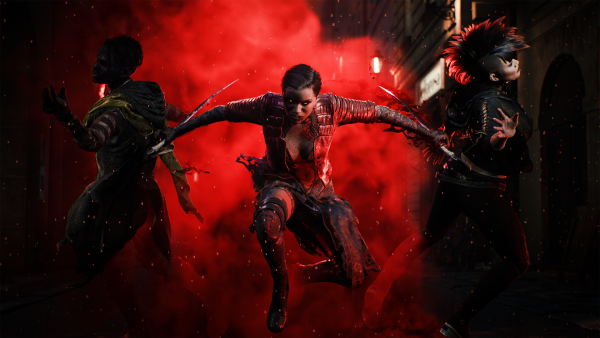 It’s clear that the members of the development team are all keen Vampire The Masquerade fans themselves — some have been following the property since the original TTRPG was published in 1991. I was curious, then, how the idea for a VTM battle royale came about.

Hultberg attributes the decision to the licence holder’s desire to try different directions and appeal to new audiences. “When we started out with this game back in 2017 we were talking to Paradox about their plans, what they wanted to do with [VTM], and they felt like they had the RPG aspect of it fairly well covered. But they also suspected there was an opportunity to reach a much wider audience with a more action-oriented or action-focussed take on the same universe.”

Meanwhile Craig Hubbard, the game’s director, feels that Bloodhunt can provide something that has been missing from every VTM video game to date: “On the gameplay side, Vampire The Masquerade is a social game, but a lot of the interpretations so far have been single-player games. Which is cool because it lets you do the storytelling aspect, but you miss out on the social interactions,” he said.

“There’s maybe not a lot of social intricacy in [a battle royale], but there’s still the social aspect of working with your squad and against enemies. And so in a weird way it kind of captures an aspect of Vampire The Masquerade that I haven’t been able to get from traditional single-player games. Personally as a fan I think it’s really interesting.” 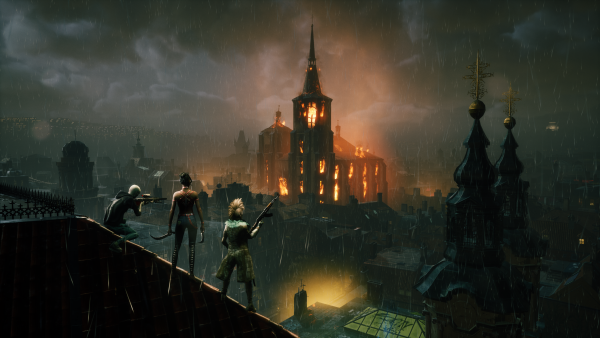 Producer David Sirland is quick to highlight another aspect of Bloodhunt that he considers a unusual blend of action and storytelling: “I want to mention because I fought for it to stay in the game: that Elysium social space where you land, which is very much not really common in an action game, but I think this could be a great vehicle for us to flesh this out over time, both on the social side — organised play and that kind of stuff — but also the narrative side.”

It seems that Elysium — terminology which VTM fans will recognise as referring to a no-combat zone, and which in the pre-alpha was used as a waiting area while matchmaking took place — will have a more significant role to play down the line. I got chatting to three quest-giving NPCs during my time there, and got hit with way more classic VTM political intrigue than I expected.

I was playing as a Brujah, and was surprised when my clan representative in Elysium wanted me to undertake a side-quest hunting down Anarchs in the city. The quest itself wasn’t in the pre-alpha build I played, but if it’s a sign of story missions to come I’m officially interested. 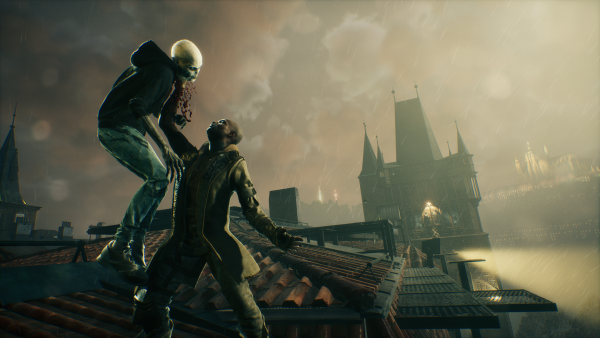 Like most games in the battle royale genre, there’s a clear intention to regularly update Bloodhunt with new content. Sirland was keen to emphasise that both the city of Prague and the Elysium space will be “evolving constantly, adding to and changing”, and that this will encompass environmental storytelling as well as gameplay challenges.

When I bring this up — making particular reference to a gruesome discovery I made during the event, of a hacked-apart torso tucked away on one of Prague’s neat roof gardens — Hultberg agreed: “We definitely want to drive exploration of the map, and one way to do that is to hide small stories and stuff you can discover.”

Now I really want to know if there’s a serial killer lurking in the world of Bloodhunt. 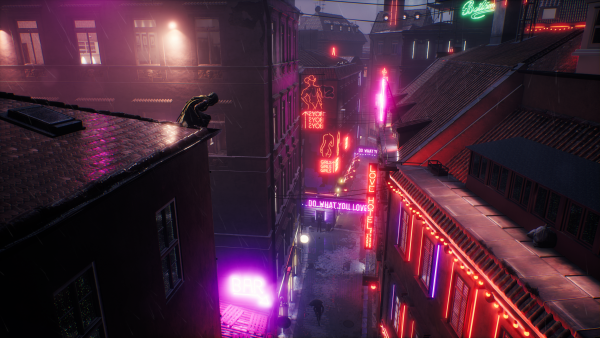 Before our interview ended, I felt like I needed to address the elephant in the room: the troubled production of Bloodlines 2, and whether the Bloodhunt devs felt that the IP as a whole was being damaged by the uncertainties surrounding the flagship title.

Hultberg’s response was positive: “I don’t think so, because honestly I think it’s a universe that’s so powerful that it stands well on its own,” he says. “And in all fairness, we are not connected to that other game in any way, we are our own game, it’s just happening in the same game universe. I don’t see it as a huge problem for us, although I am looking forward to playing [Bloodlines 2] myself, so for me it was a bit sad.”

Hubbard agrees: “We haven’t heard any backlash or anything like that, or any sort of dark feelings about it.” 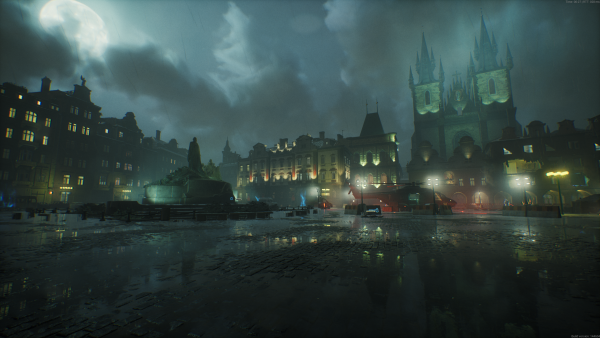 Now that I know a bit more about it, I’ll confess Bloodhunt still feels like an odd one to me. As a battle royale setting it’s hard to picture the gloomy World of Darkness competing with the near-universal appeal of a bright and fun game like Fortnite or Apex Legends. And on the other hand, I suspect there are a lot of long-time VTM fans whose imaginations simply won’t be captured by the premise of a primarily action-focussed game set in the world.

Will Bloodhunt end up, as its developers hope, reaching a wider audience than the more story-oriented VTM games? Or will it end up mainly appealing to (what I’m guessing is) a fairly niche group: pre-existing fans of the setting, in the market for a battle royale that suits their aesthetic?

As a Vampire The Masquerade fan of many years’ standing, I can at least say that any fears I had about the game’s place in the wider World of Darkness have been alleviated considerably by what I saw in the pre-alpha gameplay.

Obviously there’s still a lot more to come before the game’s release, but I’m optimistic knowing that it has been developed by a team who are passionate fans of the setting, and that the decision to make a battle royale — while undoubtedly outside-of-the-box — has been thoughtfully integrated into the broader creative mission for Vampire The Masquerade and the World of Darkness. 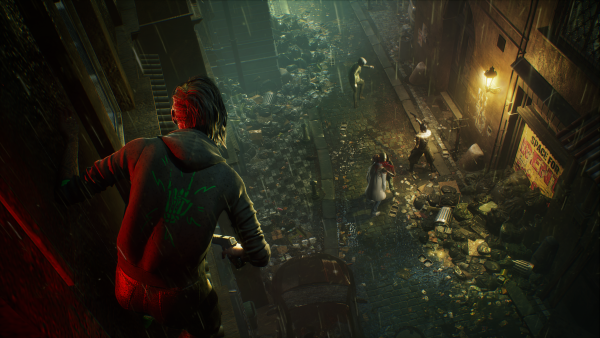 You can learn more about Vampire The Masquerade: Bloodhunt over on its Steam page, or sign up for the closed alpha via the game’s website.

The post Why as a Vampire The Masquerade fan I’m optimistic about Bloodhunt appeared first on VG247.