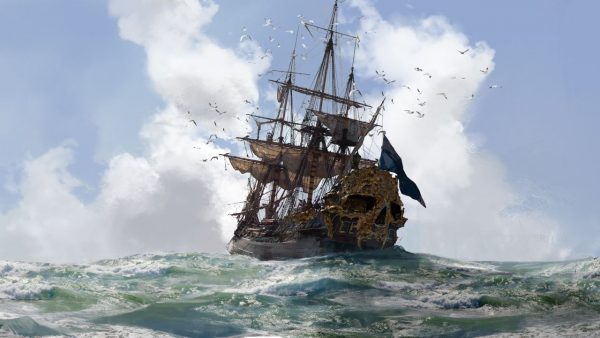 Remember the Ubisoft game Skull & Bones that was announced at E3 2017? It has been in development for eight years and is just now reaching the alpha stage of production.

That’s according to various Skull & Bones developers at Ubisoft who spoke with Kotaku recently.

What started off as an offshoot of Assassin’s Creed: Black Flag back in 2013, instead of being released as a post-launch update, the project became its own title and went into development at Ubisoft Singapore. The game was announced at E3 2017 as a cooperative multiplayer title with PvP and plenty of environmental factors to contend with such as the wind and ocean currents.

It all sounded rather fun, and many were looking forward to its release in fall 2018. However, in May 2018, Ubisoft announced it had delayed the game to 2019. All seemed to be going well despite the second delay because the public was given another look at the game during E3 2018. Then, when May 2019 rolled around, the game suffered yet another delay pushing it into the company’s 2020/2021 fiscal year.

Then came news of a reboot for the game, and finally, last we heard, it is now expected to be released sometime after April 2022.

So, the reason for all the delays? According to over 20 current and former Ubisoft developers, as well as those with knowledge of the game, it has suffered from a troubled development, mismanagement, annual reboots, and there was apparently never a “clear creative vision behind it.” The Kotaku article states that even the core design wasn’t nailed down for ages and that the game has now blown through its initial budget, costing Ubisoft around $120 million what with employees from other Ubisoft studios continue now pitching in.

Over the years, development has stalled or changed on more than one occasion due to feedback from Ubisoft corporate, new managers, staff changes, and more development issues. As it stands now, the game is on its third creative director, and hopefully, things will progress in a more positive manner from here on out.

“No one wants to admit they fucked up,” said one developer. “It’s too big to fail, just like the banks in the U.S.”

“If Skull & Bones were at a competitor, it would have been killed 10 times already,” said another former developer.

One current developer even compared the SKull & Bones saga to Bioware’s Anthem, a game with a rocky beginning that was due for a reboot which was eventually canceled.

Even so, with all the problems it has faced, Ubisoft is standing behind the multiplayer game and seems determined to release it at some point as a live service game which is the direction Ubisoft is heading with its releases. Add in the fact that in Singapore, the government requires a company like Ubisoft to launch a new title due to the number of subsidies it hands out. So, basically, Ubisoft has no choice but to ship the game.

The Kotaku piece goes into much more detail on the game’s troubled development, and you should really give it a read.

The post Ubisoft’s Skull & Bones has entered alpha stage, but it’s taken eight years to get there appeared first on VG247.