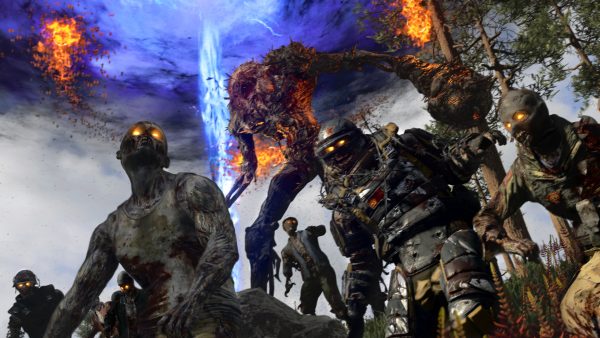 Zombies players have a lot to look forward to with this week’s Black Ops Cold War update.

Treyarch has shared an outline of the new Zombies content and additions coming to Black Ops Cold War this Thursday with the mid-season update. Although there is no new map for standard round-based Zombies, this is an especially stacked update nonetheless.

First, Outbreak will now have its own main quest, otherwise known as an Easter egg. Since launch, Outbreak never really had meta-objectives beyond the most immediate tasks players are asked to perform in every region. This changes with the patch, which introduces the quest, alongside new intel to hunt.

Enemies in Outbreak will be bolstered by the arrival of the giant Orda boss as a world event. Treyarch also teased that fishing is coming to Outbreak, but didn’t share much there.

The new content extends to weapons, with the list of Mystery Box items now updated to include all post-launch weapons. All weapons in Zombies are getting buffed in the same update, too, in both standard and Pack-a-Punched variants. On the subject of weapons, Outbreak players will be happy to now that all weapons found within the level can now use unlocked blueprints and attachments.

You’ll be able to apply your existing setup for a given weapon using the Apply Blueprint feature. Another great quality of life change in the patch is the ability to ping the world map. In the future, you can expect the pause menu to track daily challenges, operator missions and so on, but this won’t arrive with this week’s update.

Something else Zombies players should look forward to is the new Cranked, an even faster version of the mode, available on Firebase Z and Die Maschine as a limited-time event with the mid-season patch.

Looking a little further into the future, Treyarch stressed that work continues on the next round-based Zombies map, which arrives sometime in Season 4. The new map, which has yet to be revealed, takes place after the conclusion of the Outbreak quest – a good incentive to hop on and finish that when it arrives.

The team is also early in development on other Zombies content, such as new perks, support weapons, Wonder Weapons, and limited-time modes – all of which will arrive over the next few seasons.

The post The Orda is coming to Black Ops Cold War Zombies Outbreak alongside a new main quest and weapon buffs appeared first on VG247.

Chivalry 2 cross-play open beta kicks off in next week