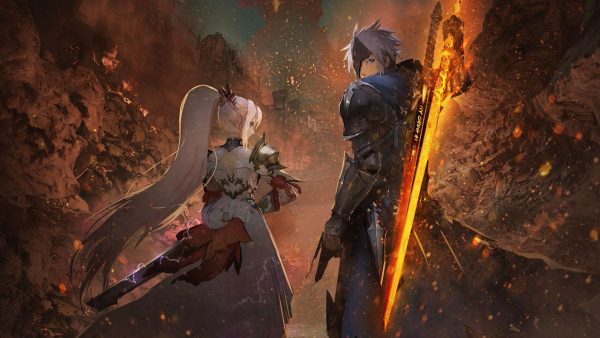 Tales of Arise has a pretty fool proof plan for evolving the series: double down on what worked before.

It’s fair to say that there’s a lot riding on Tales of Arise. It’s been five years since the last entry in the series, 2016’s Tales of Berseria, and a lot has changed in that time – much of it shaking the Japanese RPG world. Titles like Persona 5 have pushed the JRPG to new heights in the West with slick presentation. Final Fantasy has fully embraced full-blown action RPG combat in FF15 and FF7 Remake – though with concessions to keep turn-based stalwarts happy. And games like The Legend of Zelda: Breath of the Wild and Genshin Impact have made many Japanese developers stop and rethink how they design worlds.

One gets the impression that the team behind Tales of Arise is acutely aware of this, too. It’s hard to truly quantify, but it just feels like a game that knows it has an opportunity to evolve the series and open it up to a whole new audience – which feels like an appropriate admission, given it follows the longest gap between Tales titles in the series’ 26-year history.

Tales of Arise carries that feeling despite actually being a bit of a safe bet, truth be told. It has the energy of a new upstart vision of the series, but it doesn’t fix what wasn’t broken – which appears to be much of what tied the past titles in the series together. What Arise does instead is simply lean harder into what has typically set Tales apart – leading to a game that feels more unique for it. 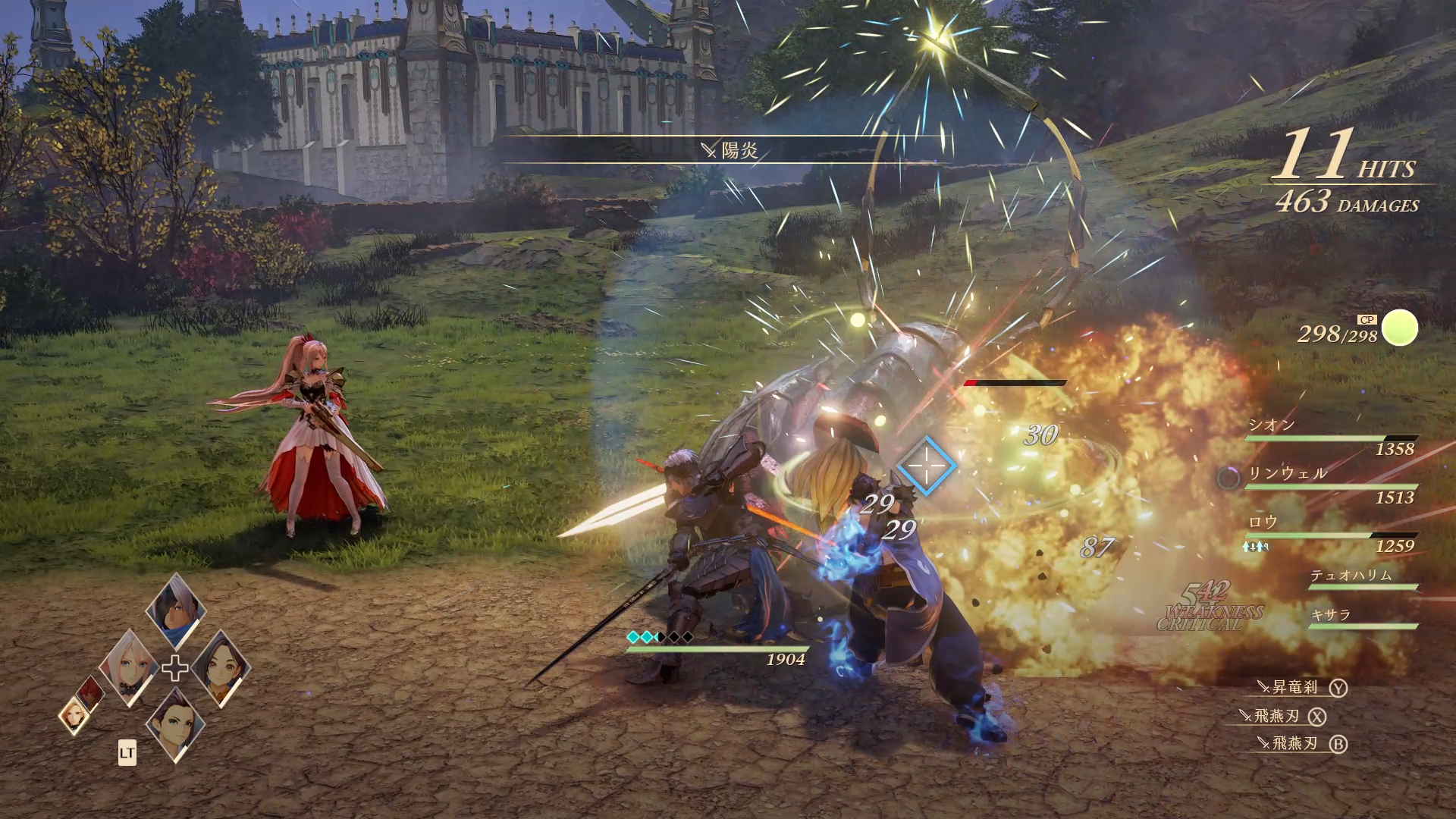 In some ways, that means you will find an unabashed adherence to the genre tropes. Protagonist Alphen is an amnesiac, for instance. Obviously. You’ll band together with a wide range of characters that span all the usual RPG classes – Healers, Mages, and Monks, Paladins with great big shields. So far so typical.

What used to make Tales particularly unique was its action-driven gameplay. While that’s now not so uncommon even among Japanese RPG titles, this is where Arise presses its historical advantage most firmly, offering loud, flashy, and attention-grabbing combat that is, to a degree, style over substance – but that’s okay ‘cos it feels damn good.

Enemies are out in the field, but battles still do take place in a separate game state – so there’s a transition, but in the PC build I played it was near instantaneous both heading into and exiting from battle. The switch to Unreal Engine 4 has resulted in a beautiful game with smooth performance – and it feels like much of the combat has been built around just how ridiculous it can get and just how good it can look without a dent in performance.

You control one character, but you’ll feel in full control of the entire party of characters you have at your disposal thanks to your ability to trigger skills from other characters at will. You can also dive into menus and customize AI in order to determine what degree of autonomy your allies will have in battle, ranging from simply telling them to focus on healing and defending to getting granular on what moves they should automatically use and when. 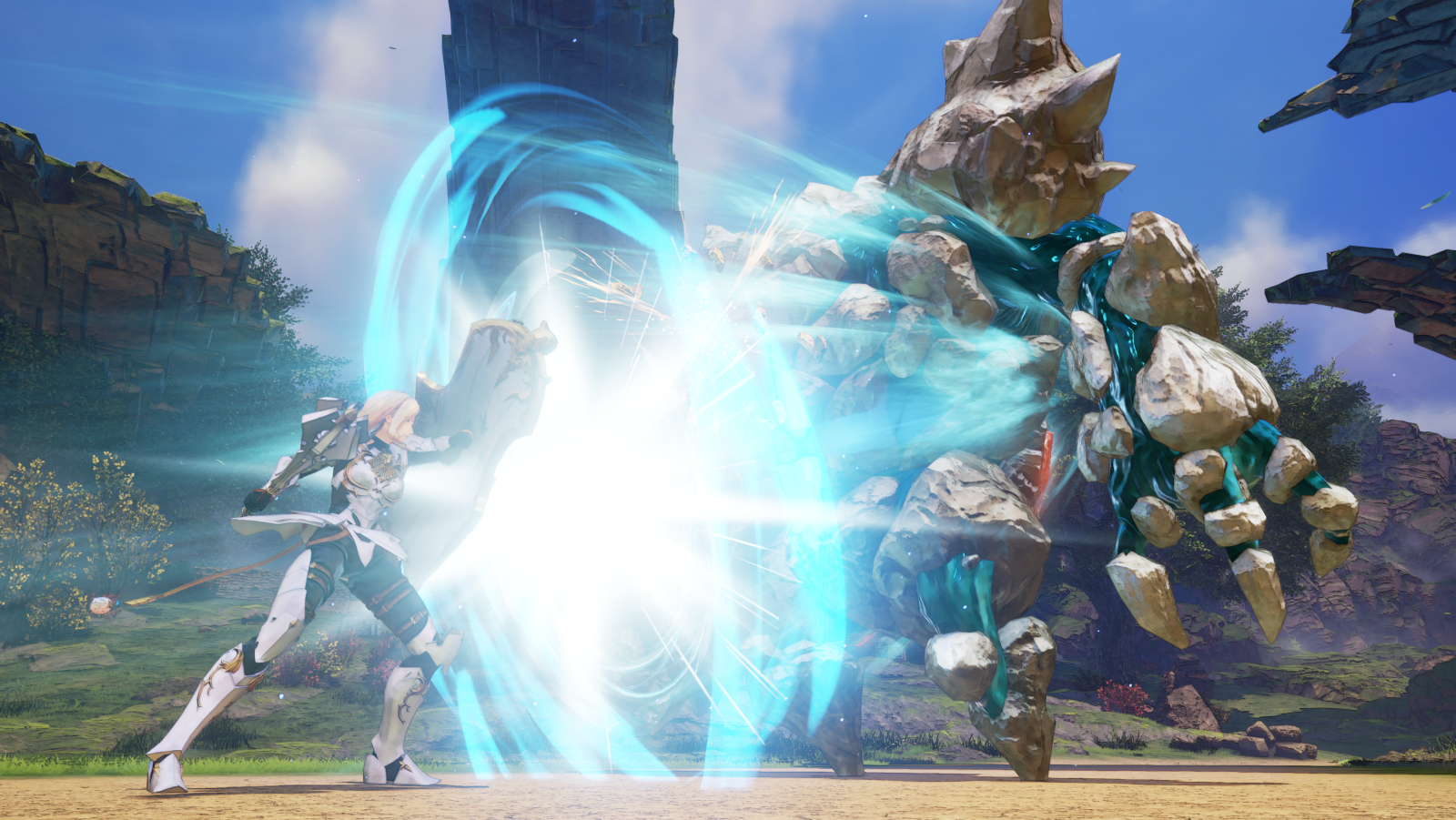 There’s a lot of party members slated for Tales of Arise, but only three will fight with you at any given time – but others can wait out-of-sight on the sides, ready to be called in at your discretion.

In this and a few other ways, Tales of Arise almost begins to resemble a fighting game. Its combo-friendly battle system allows you to juggle unsuspecting enemies, holding them in mid-air while triggering ally skills to dish out delicious amounts of damage. You’ll be using Artes, the first tier of powerful skills, to blast down enemies until they enter the state where you can then trigger Strike Attacks, devastating team combos with cinematic zest.

Many special moves cut away to cinematic camera angles in a manner that’s brief enough to not feel like a loss of control but significant enough to catch attention. The inspiration of anime is obvious, and at its best Tales of Arise is an explosion of color as characters team up to blast enemies to dust.

Generally speaking you can mash your way through the simpler encounters, but once you reach the bigger bosses, you’ll need to approach everything far more carefully. Party composition seems like it’ll matter deeply, as will your overall understanding of the flashy chaos that fills the screen. It’ll be your job to enjoy that visual flair, but also parse it into data that can be used to quickly formulate a proper combat strategy.

It all looks very cool, and feels very good. There’s a story too, of course – but the demo I play is so short and what I say about it so limited that I don’t even scratch the surface of what is no doubt a lengthy epic. You’ll spend most of your time in combat, though – so it’s exciting to report that it feels so good.

I look forward to seeing the depth of the final release’s combat – and how this entry delivers on a satisfying Tales story driven by strong characterization and quieter moments, as the series has previously excelled doing.

Tales of Arise releases this September for PC, PS4, PS5, Xbox One, and Xbox Series X/S.

The post Tales of Arise hands-on: turning the series’ action RPG thrills up to eleven appeared first on VG247.

Final Fantasy 9 is being turned into an animated series