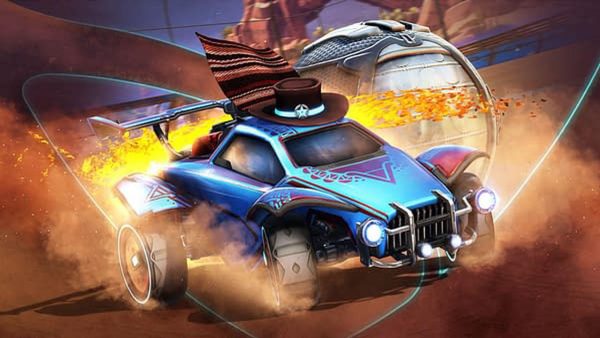 Rocket League Season 4 launches later this week on every platform you can play the game on, and it’s bringing a fair amount of new content with it.

Rocket League developer Psyonix has finally announced the release date for Season 4 of Rocket League. The new Season is due to go live on August 11 (tomorrow). In terms of the Rocket League Season 4 start time, we tend to see it go live around 8AM PT / 11AM ET / 4PM BST. That’s just a rough guide, though.

As has beome standard for the game since it adopted the Seasonal cadence that many other games have, we’ll get a whole new Rocket Pass and a Rocket Pass Premium to work our way through once the update is live.

Rocket Pass Premium comes with 70 tiers of rewards, and the new Outlaw car (pictured). The developer is also adding the Deadeye Canyon Arena that’s going to start appearing in all standard playlists when the update drops.

There’s also a pair of limited-time modes coming, too; to celebrate the new Season launch, we’ll see two-on-two Heatseeker as the featured LTM on August 12. Following that, on August 19, an LTM that “combines mutators, the speed of Boomer Ball without the wild bounces, demos on contact, and a fast respawn timer” will go live. Sounds frantic.

The developer is adding and an expanded set of Competitive Tournament modes (including more 2v2 and Extra Modes), too. If you wanted more. If you’ve been enjoying Spring Loaded in Private Matches, don’t worry: that’s set to make its way into the main game at some point, too.

If you’re a content creator playing the game that’s been hit by DMCAs or similar, fret not: a new audio setting that allows you to switch off copyrighted music has been included in this update, too. It’s only a small thing, but it should make a big difference for a lot of people.

If you’re still playing the game, here’s our list of all active Rocket League codes and how to get free stuff in Rocket League.

Idris Elba to voice Knuckles in Sonic the Hedgehog 2 movie