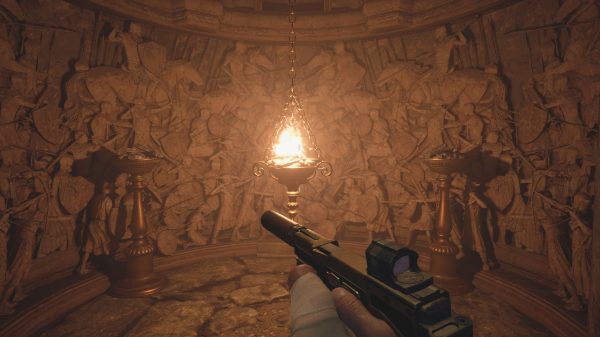 After making it through no less than the second strange door in Resident Evil Village so far, Ethan escaped from one of Dimitrescu’s daughters by running down the hallway to the left and into the dressing room.

On the far side of the opulent parlour, there were some much less elegant boards masking a construction area that led down to the basement, where you find yourself now. 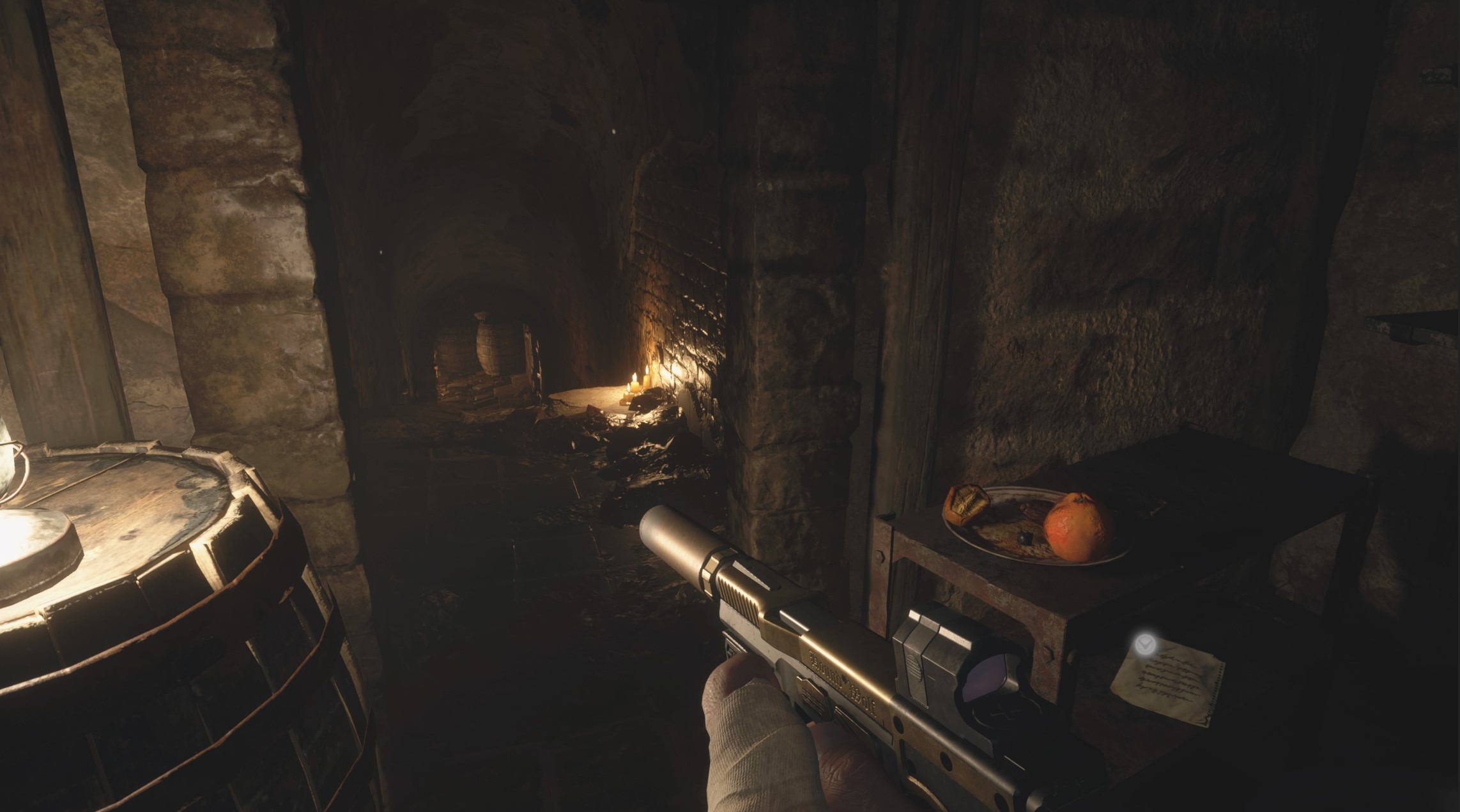 Through the Hall of War

To advance, go down the stairs, picking up the scrap from the alcove on your left, then go through the hole in the second alcove – where you catch a glimpse of a bodacious figure swaying to Danse Macabre before she leaves the room. 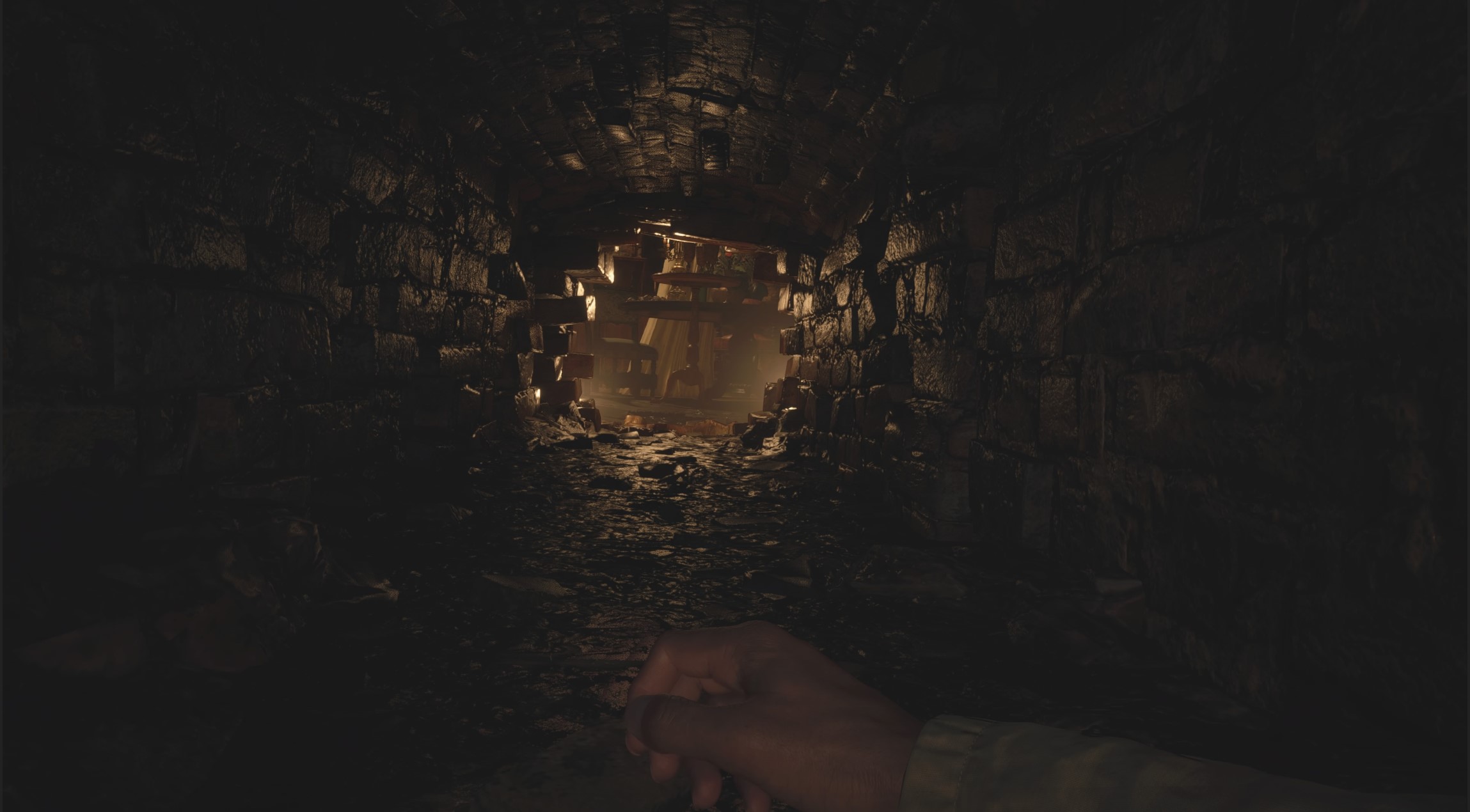 In this tasting room, look immediately to your right for some handgun ammo, then go around the table and down the stairs. Look up at the top of the stairs and you’ll see there’s a flashing crystal fragment in the ceiling you can dislodge with your knife. 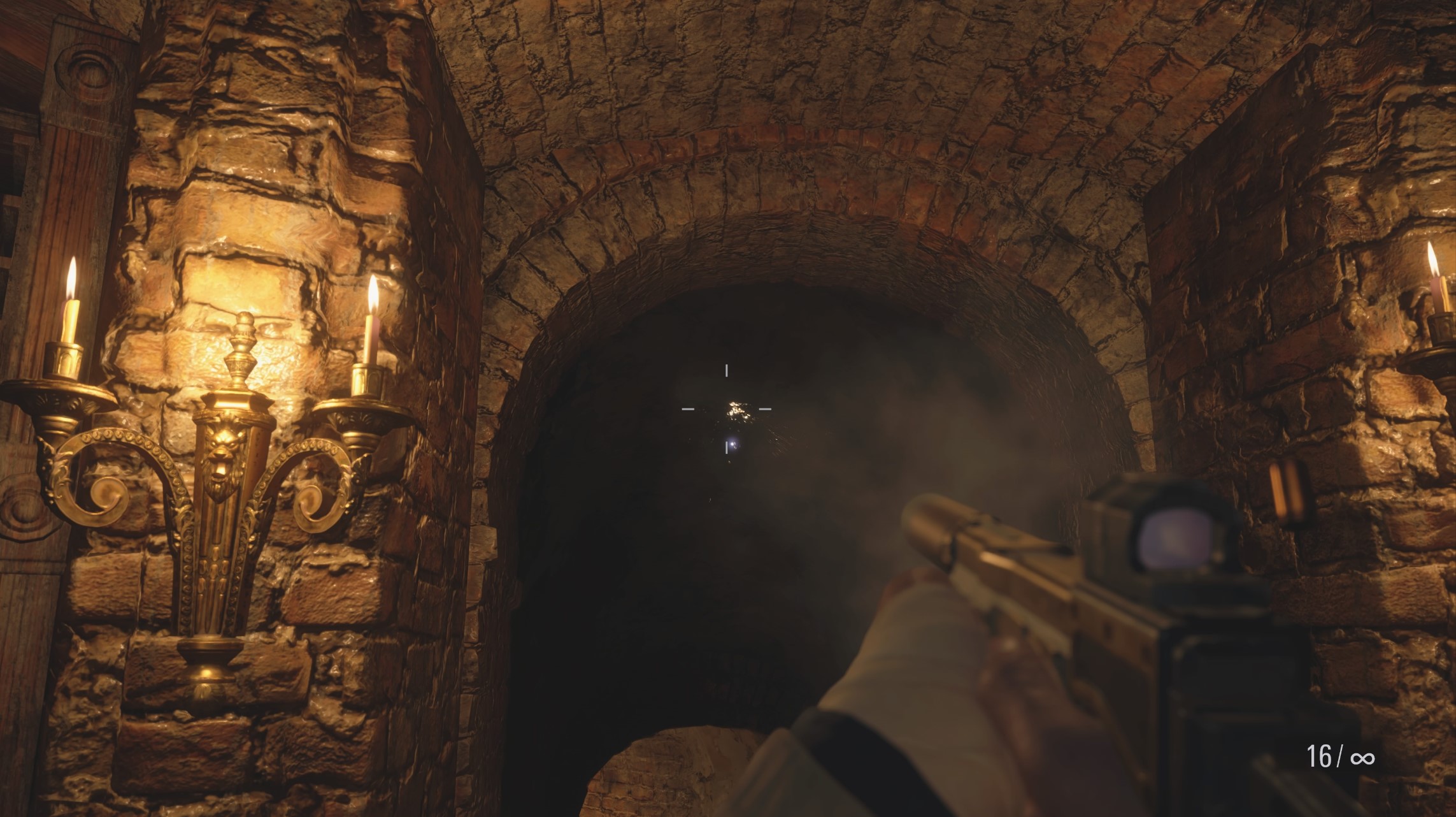 In the wine cellar at the bottom, there’s a breakable box on the left full of money, then continue into the next, well-lit, room: the foreboding Hall of War. 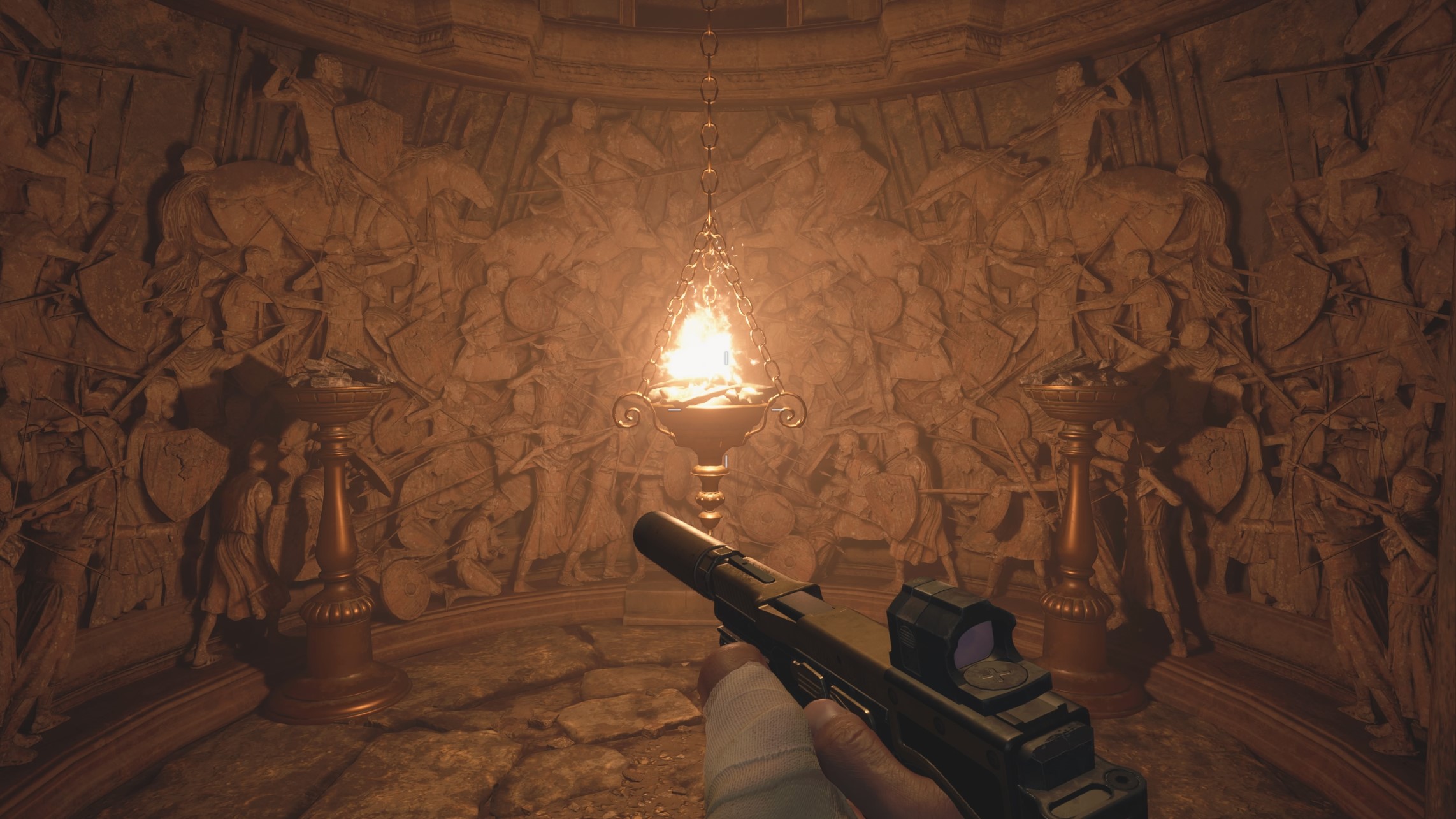 To advance here, push the flaming brazier into the unlit ones – this opens the door. 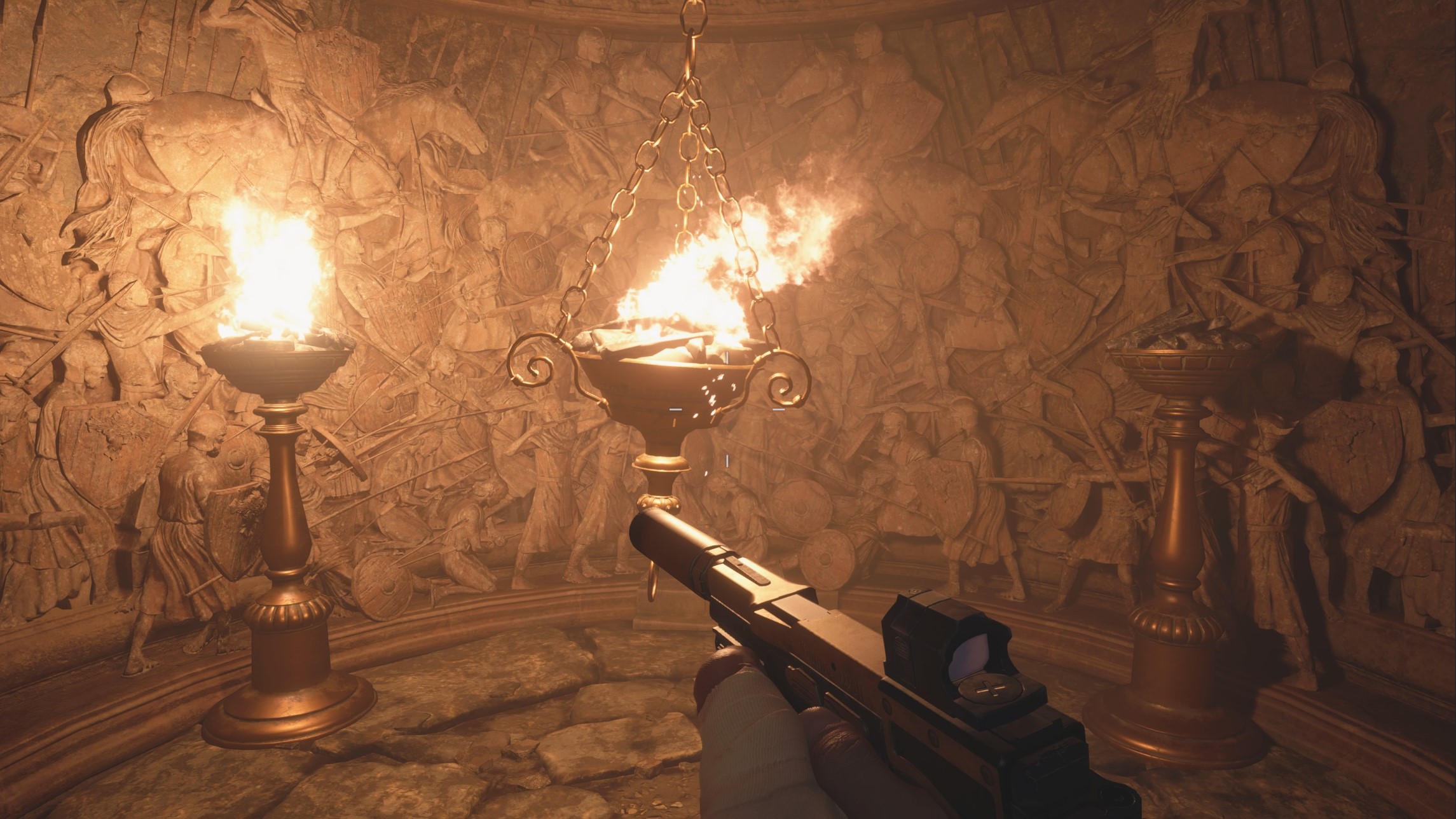 Make your way into the dark dungeon from the Maiden demo, walk forwards until you reach the second cell on the left and make your way through the door. 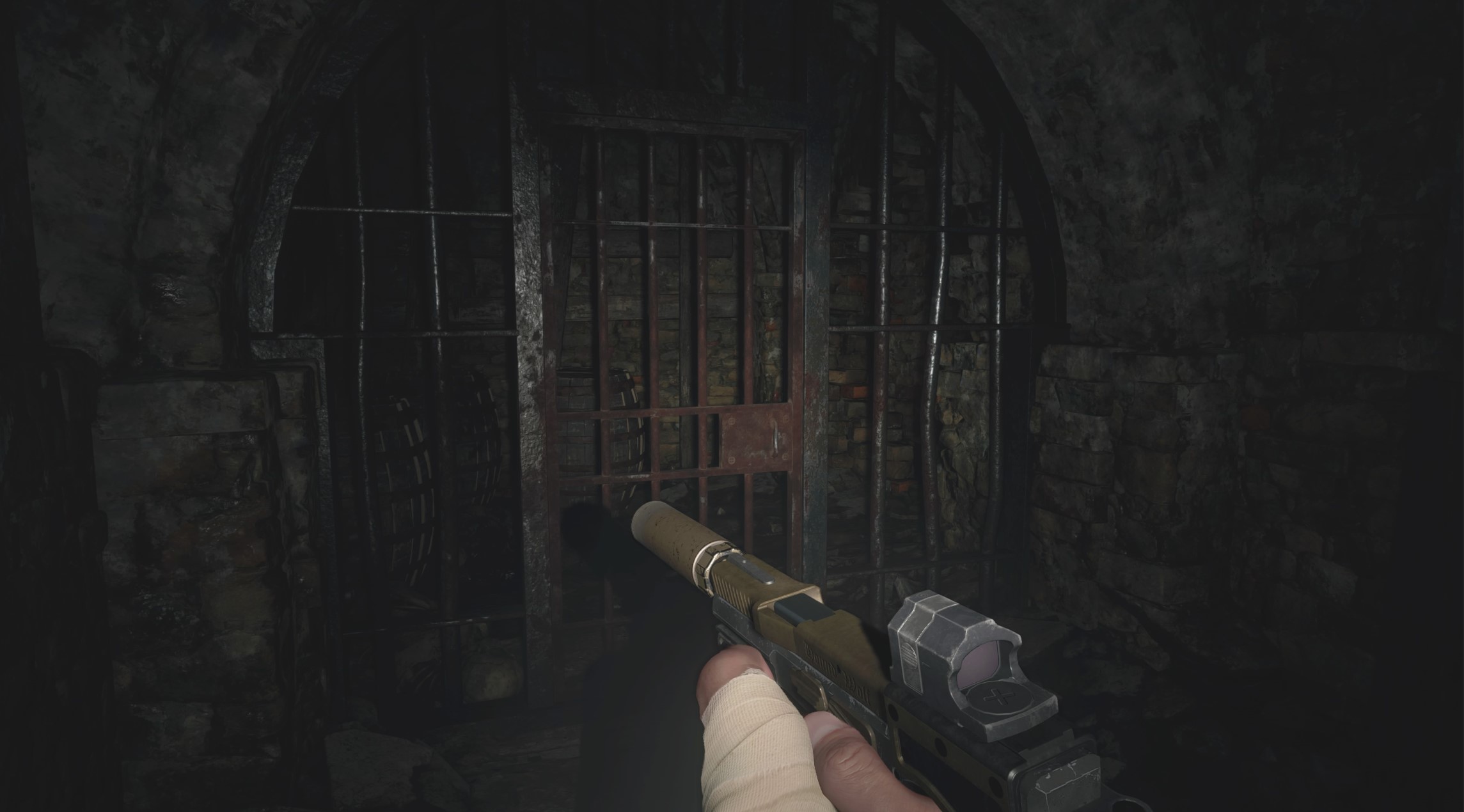 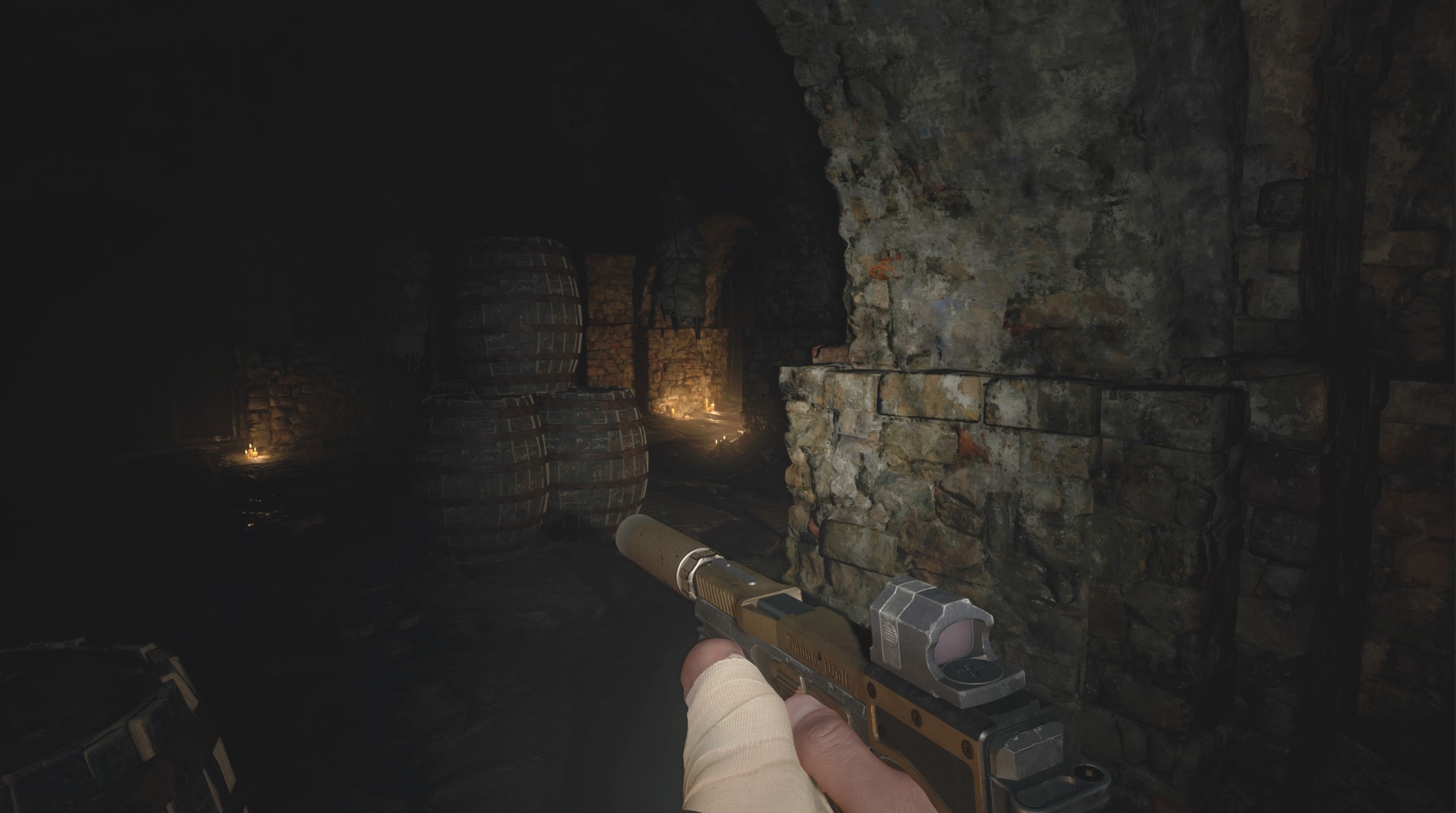 Take a left, then look left again to see a breakable box, which has money inside, then go into the last cell on the left for some scrap.

Finally, go into the cell at the top of the room to find some metal scrap – a rare crafting resource.

When you’re ready, head right – yes, towards the gross hissing noises – into the next part of the dungeon.

This is called the Chamber of Solace, but it’s not going to offer much right now.

Three creatures will stalk towards you, which you can either kill with pistol headshots like the Lycans, or your shotgun. 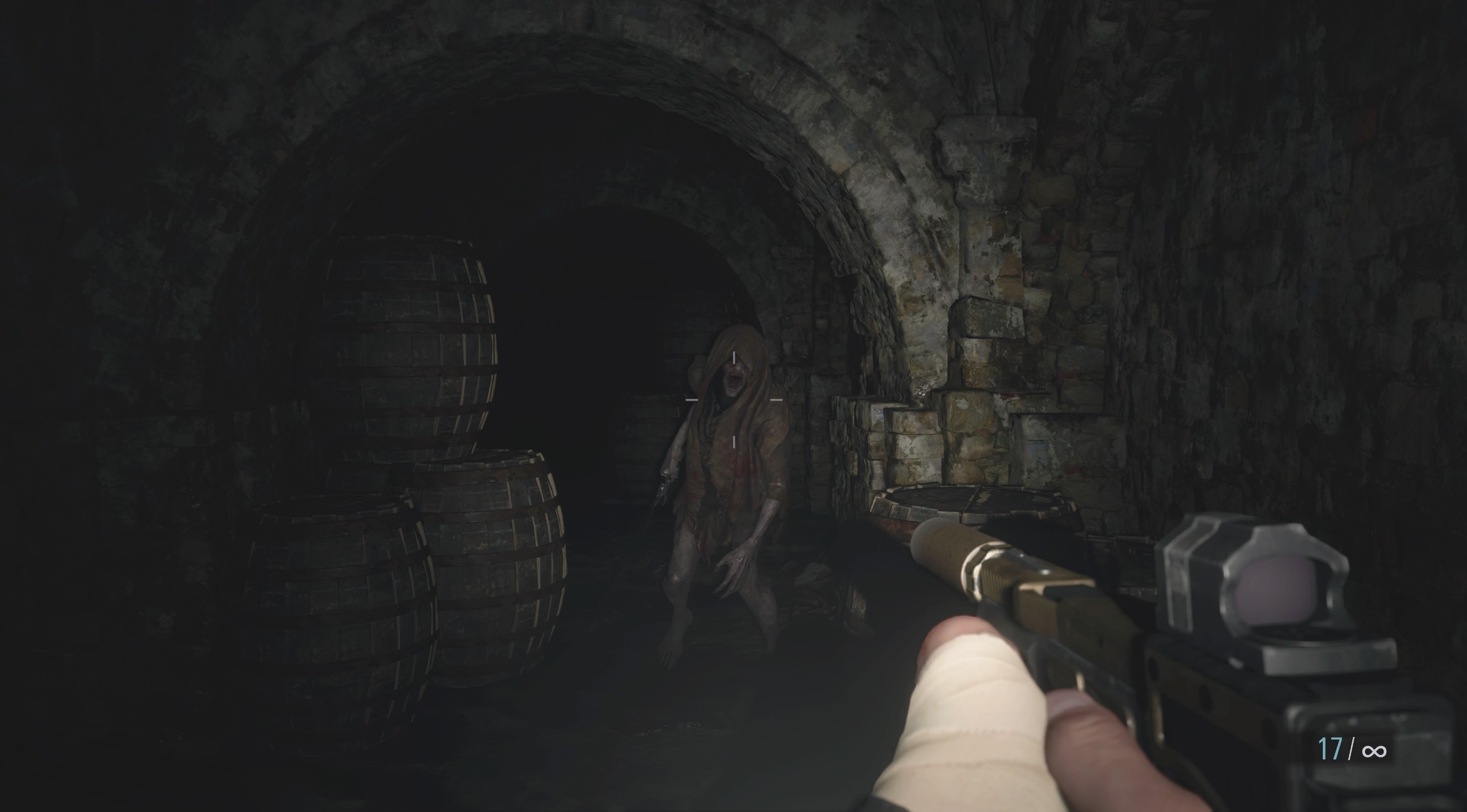 If they get too close, they’ll grab and swing a weapon at you, so backpedal to keep your distance – with them down, return to where you saw them.

In the cell at the top of this area, there’s a breakable box with ammo inside, then around the corner through the broken wall, there’s another box – this time with a pipe bomb inside – on the table after you’ve dealt with another zombie-adjacent nasty. 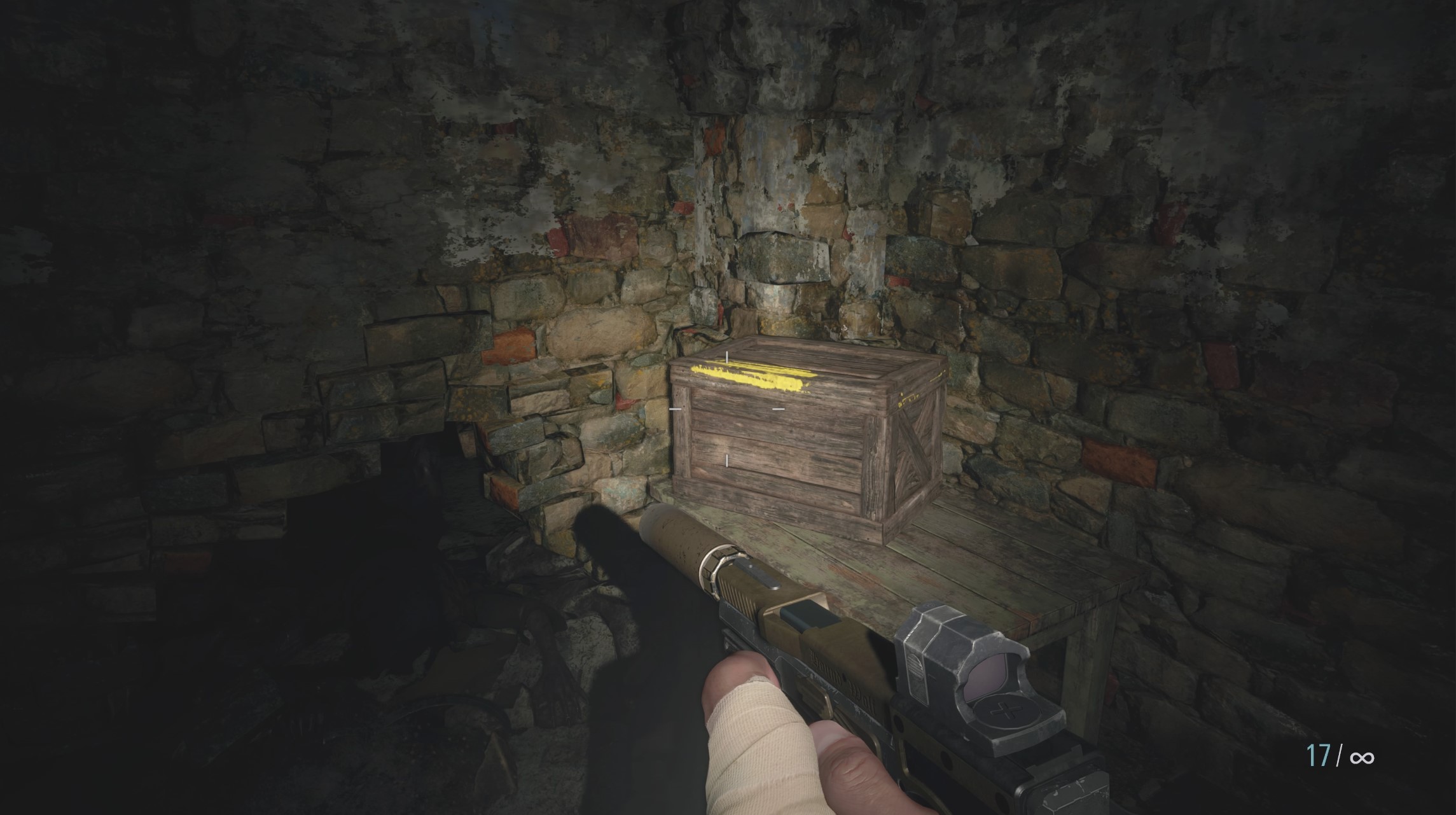 Make your way further towards the bottom of the chamber of solace and you’ll see another box on your left.

Grab the Lei in here and three more baddies appear. When the last one’s dead, it drops Ingrid’s Necklace which you can sell for Lei. 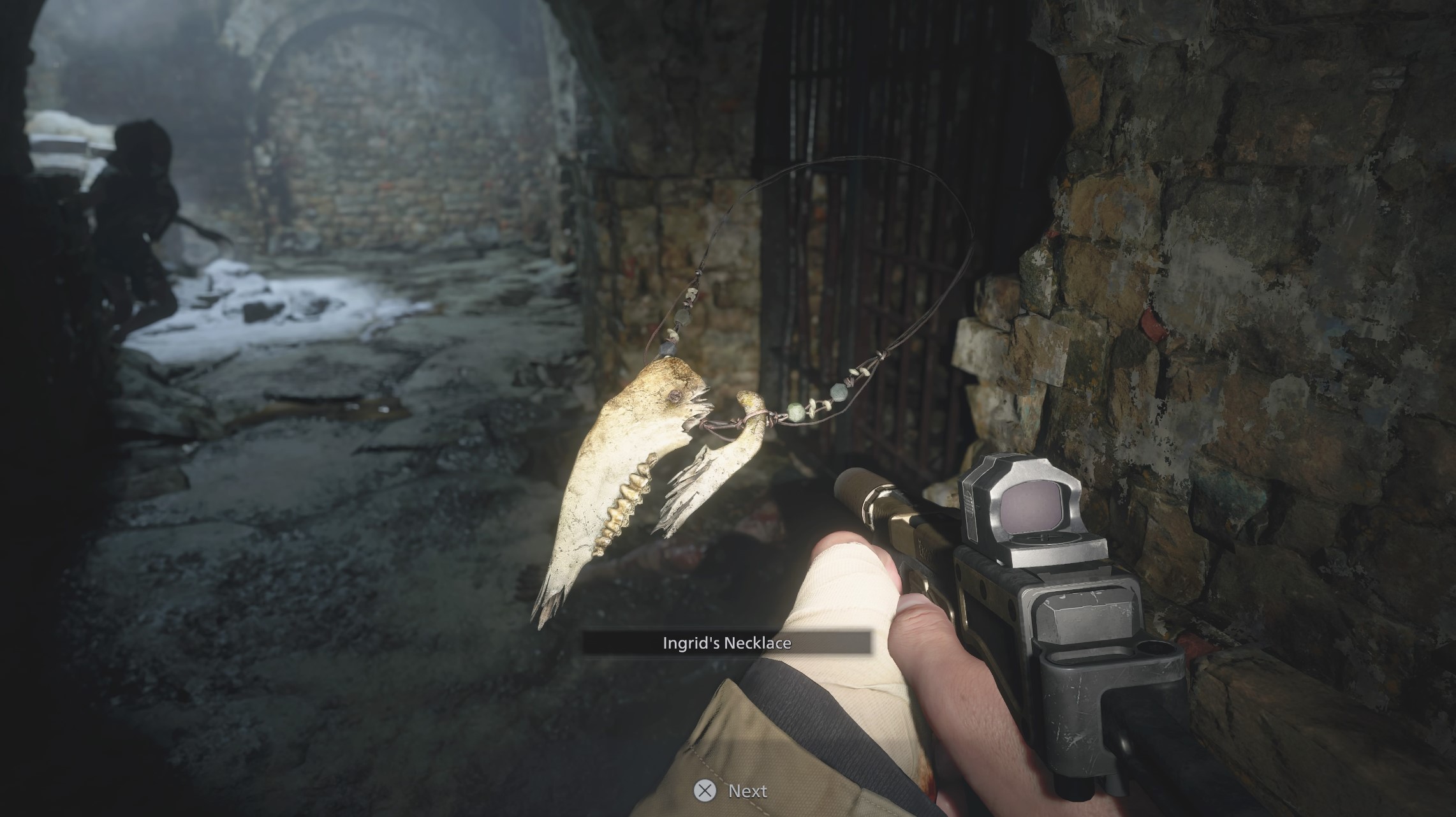 In the cell at the bottom of the Chamber of Solace, there’s some scrap poking through a hole in the wall – which you probably need with the ammo you’re burning through.

Then go through the lit area on your left – collecting more ammo from the box in the cell at the bottom – and up the stairs on the other side. 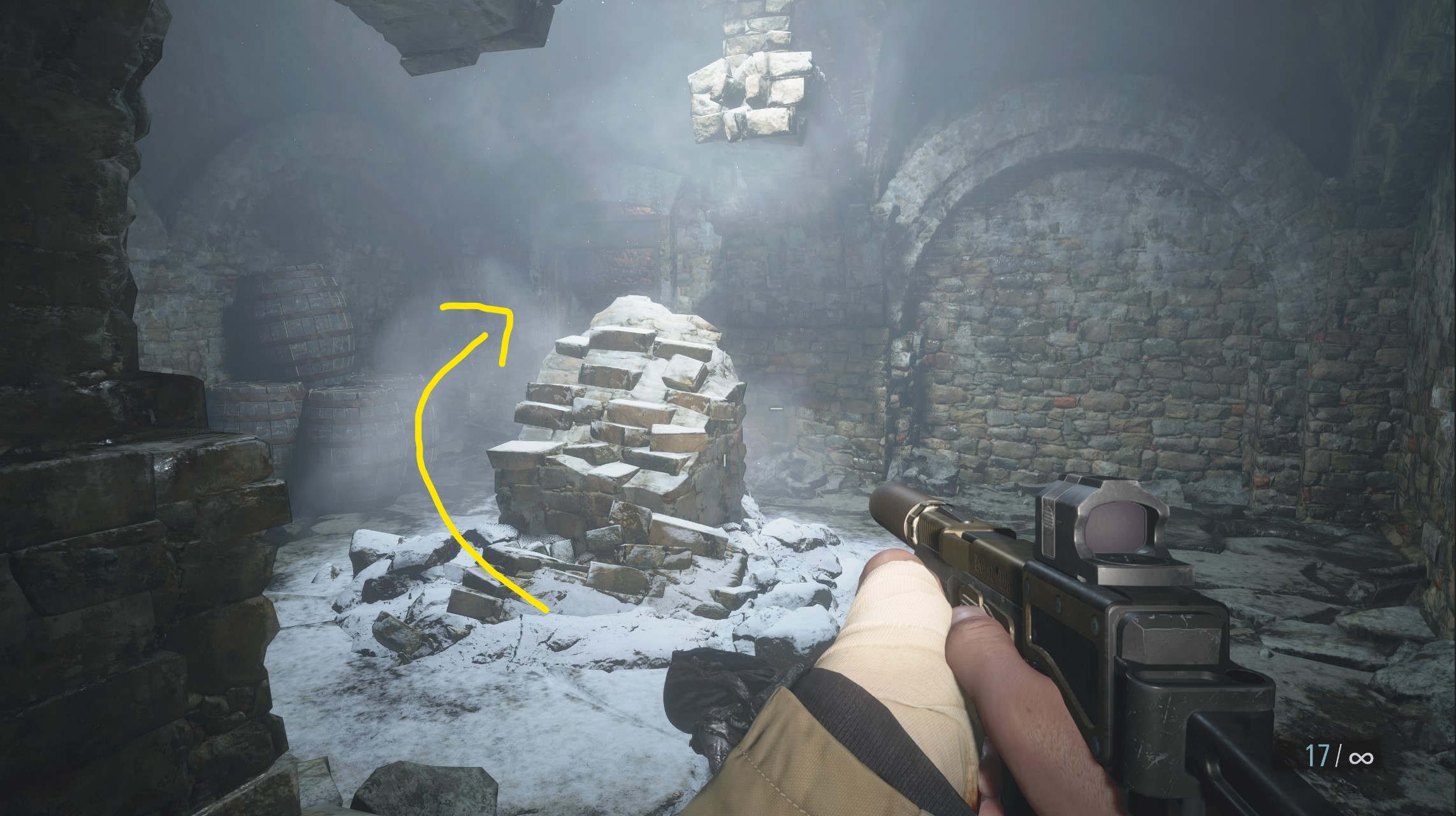 In the next area, leave the gold sealed door, then grab the box on your right for yet more ammo. Hastily make your way right, through the cells, and over to the staircase on the far side.

At the top of the stairs, there’s some shotgun ammo on your left, but you want to make your way right quickly, then break through the planks blocking your path. 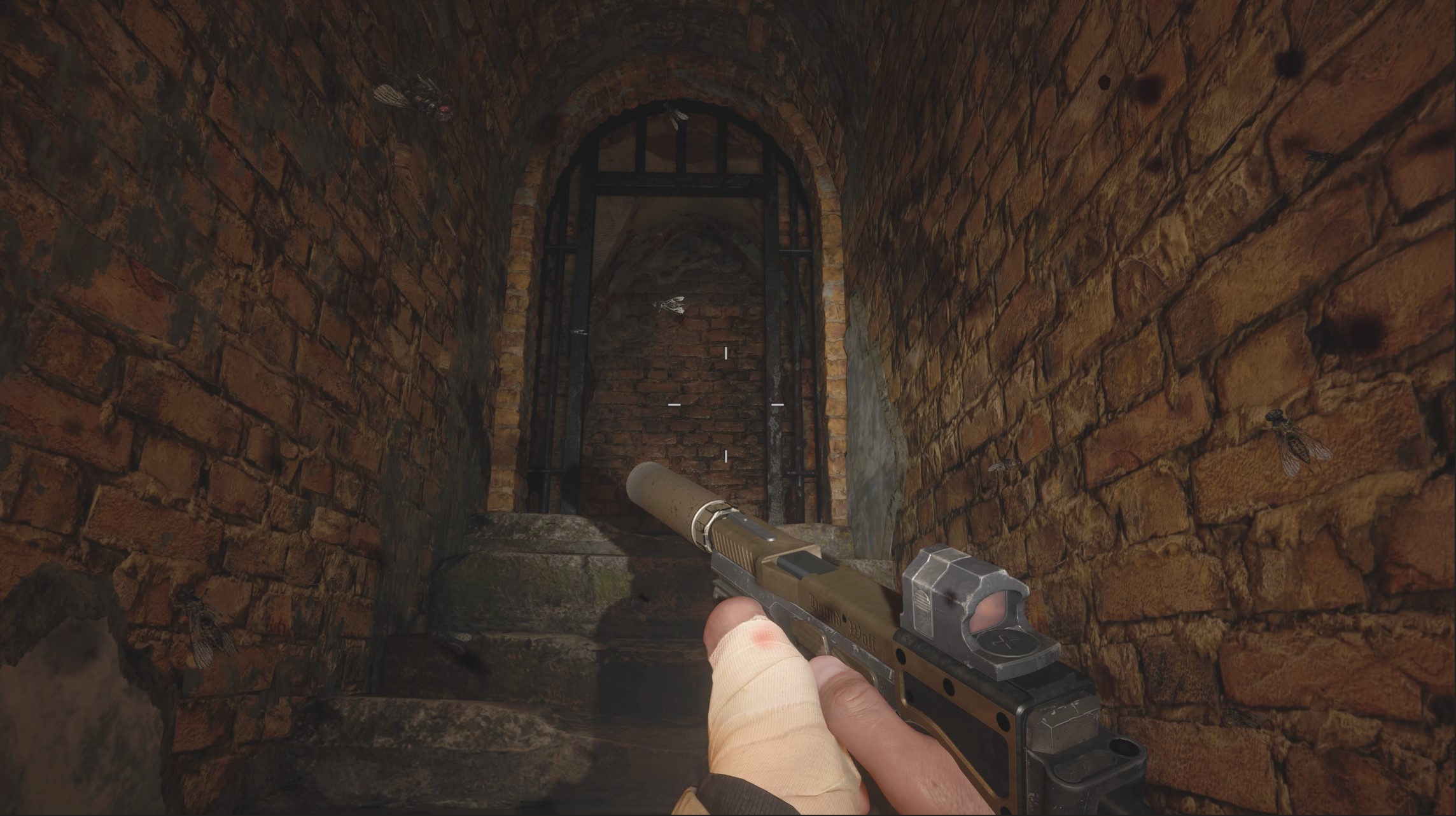 When you regain control in the next room, you’ll be face-to-face with Bela, one of Lady Dimitrescu’s vampiric daughters.

To defeat her, you first need to make her vulnerable to your attacks.

Look to the wall on your right after the scene, and you can shoot out the other window, letting the cold sunlight into the room. 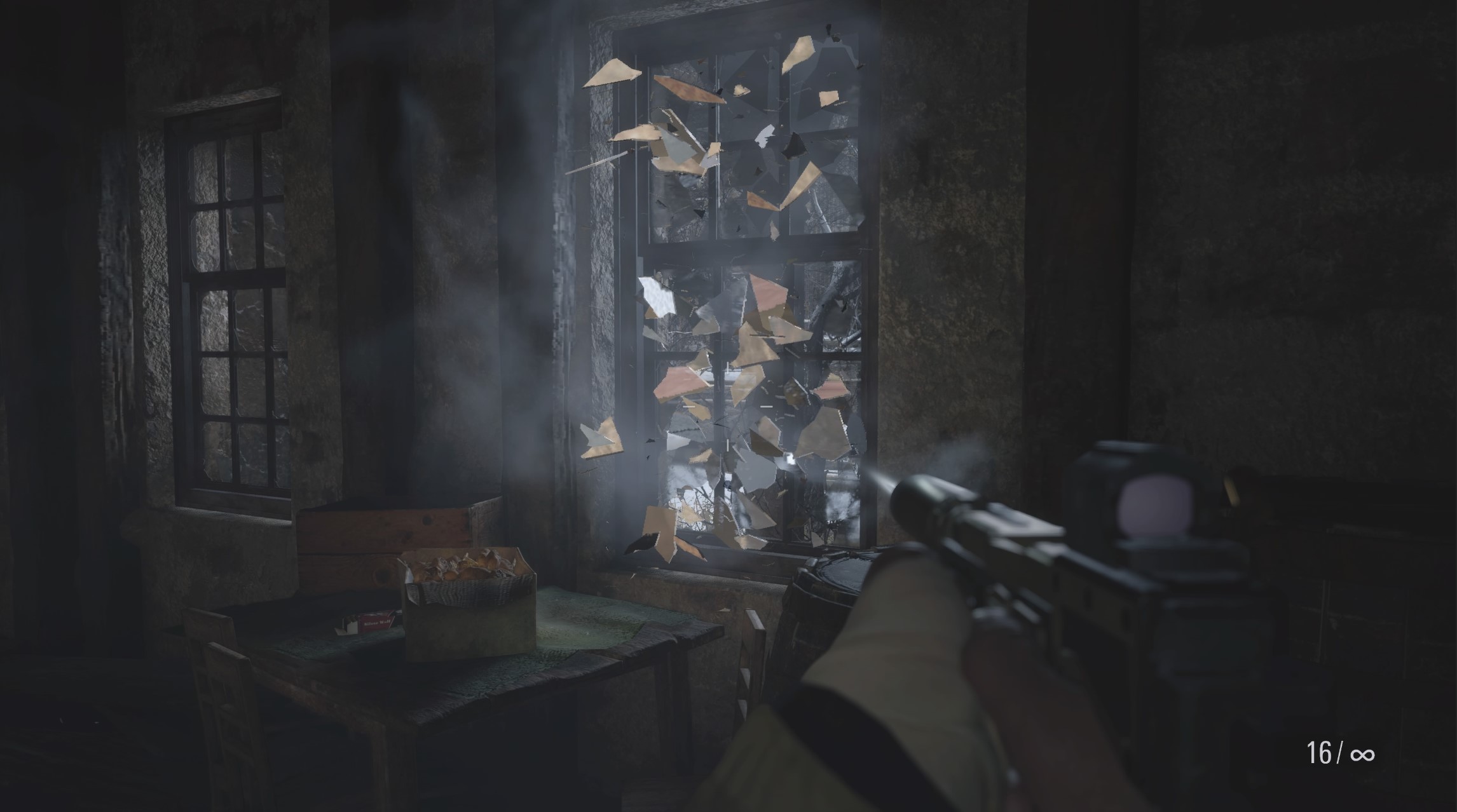 With her weakness exposed, shoot her as you would any other enemy – albeit a tougher one, and she’ll eventually go down. 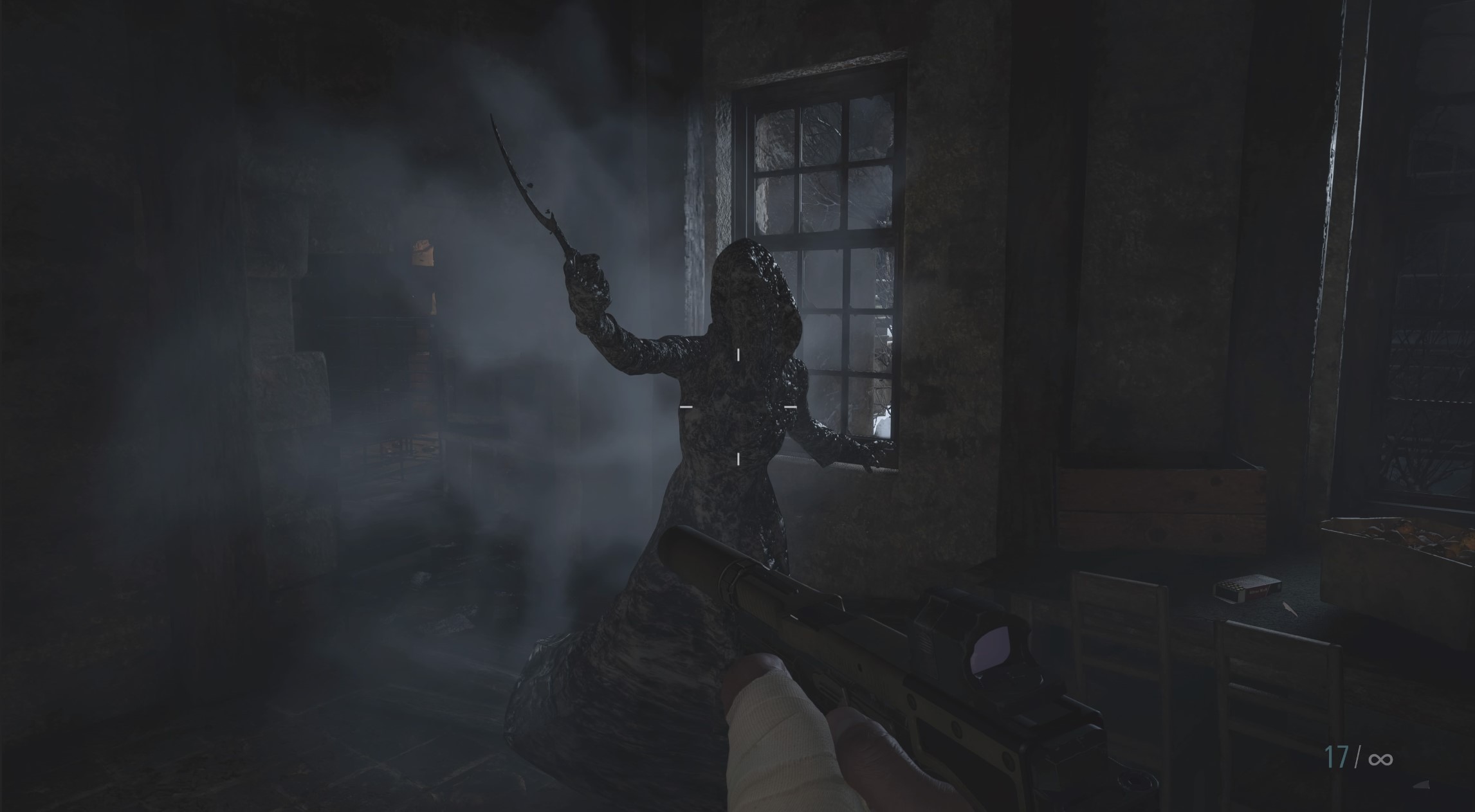 Pick up the Crystal Torso she leaves behind, which you can sell for a good price, then take stock of yourself, and walk forward back into the castle.

In the kitchen, walk forward and pick up the Sanguis Virginis from the blood-filled cooler – you know this goes in the wine room above the main hall – then scour the room for loot in breakable boxes and drawers. 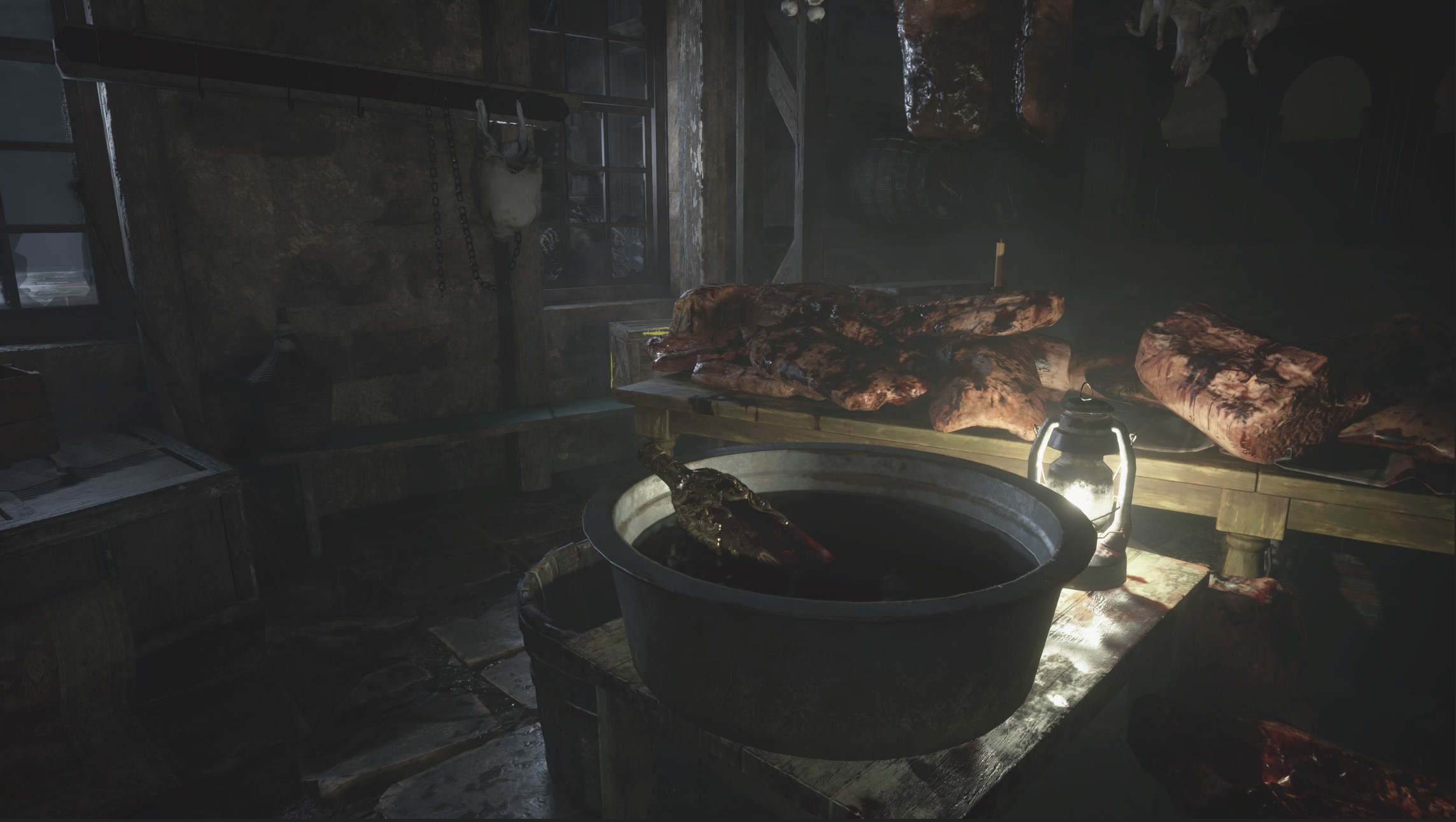 In the next hallway there’s a locked drawer on the right, then a recoil compensator upgrade in a case for your standard pistol.

You can easily get the wooden angel statue (another saleable item) out of the locked drawer, because there’s a free lockpick on the sideboard further up the hallway.

Through the door at the end of the hall, you’ll emerge in a dining room.

On your left is a locked door, then you’ll find some gunpowder in a drawer and a crystal fragment in the ceiling above you. 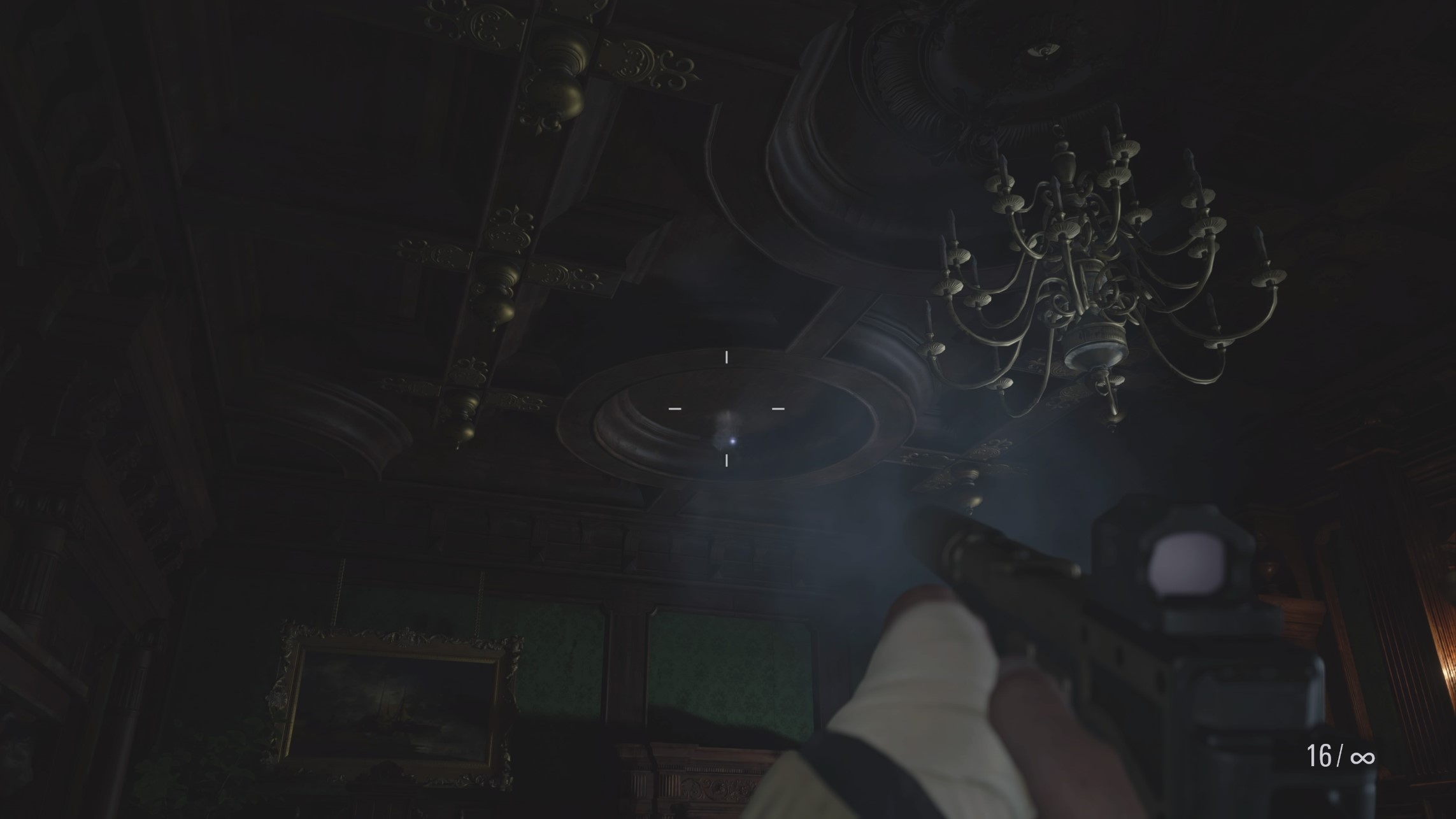 Now unlock the door to the right to return to the main hall. Head up the stairs and into the wine room. 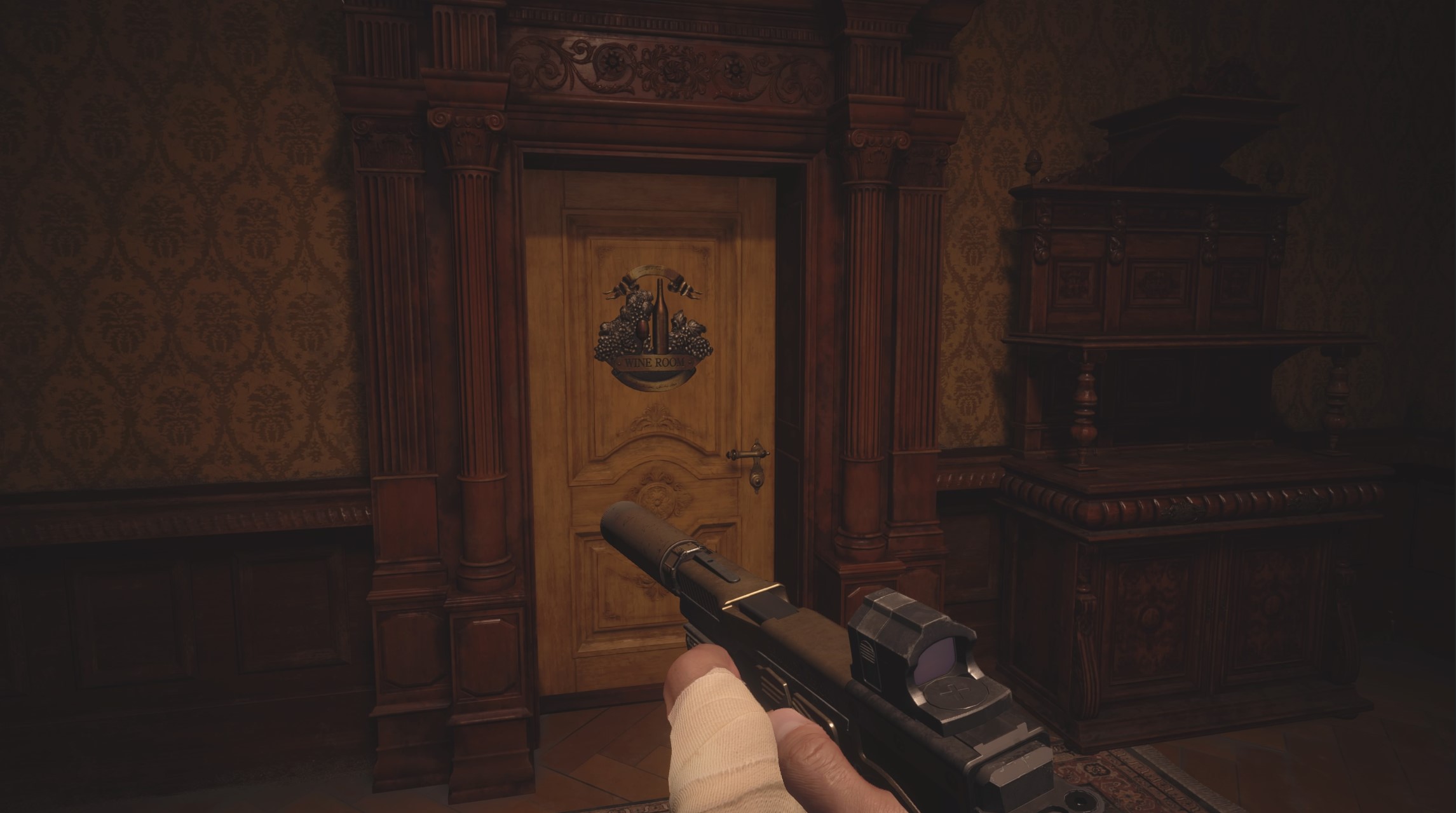 Use the wine bottle on the stand in the cubby and it’ll open a secret door.

Inside, there’s some gunpowder on the side and a jewellery box on the counter. Open the box and take the courtyard key to the large door in the dining room. 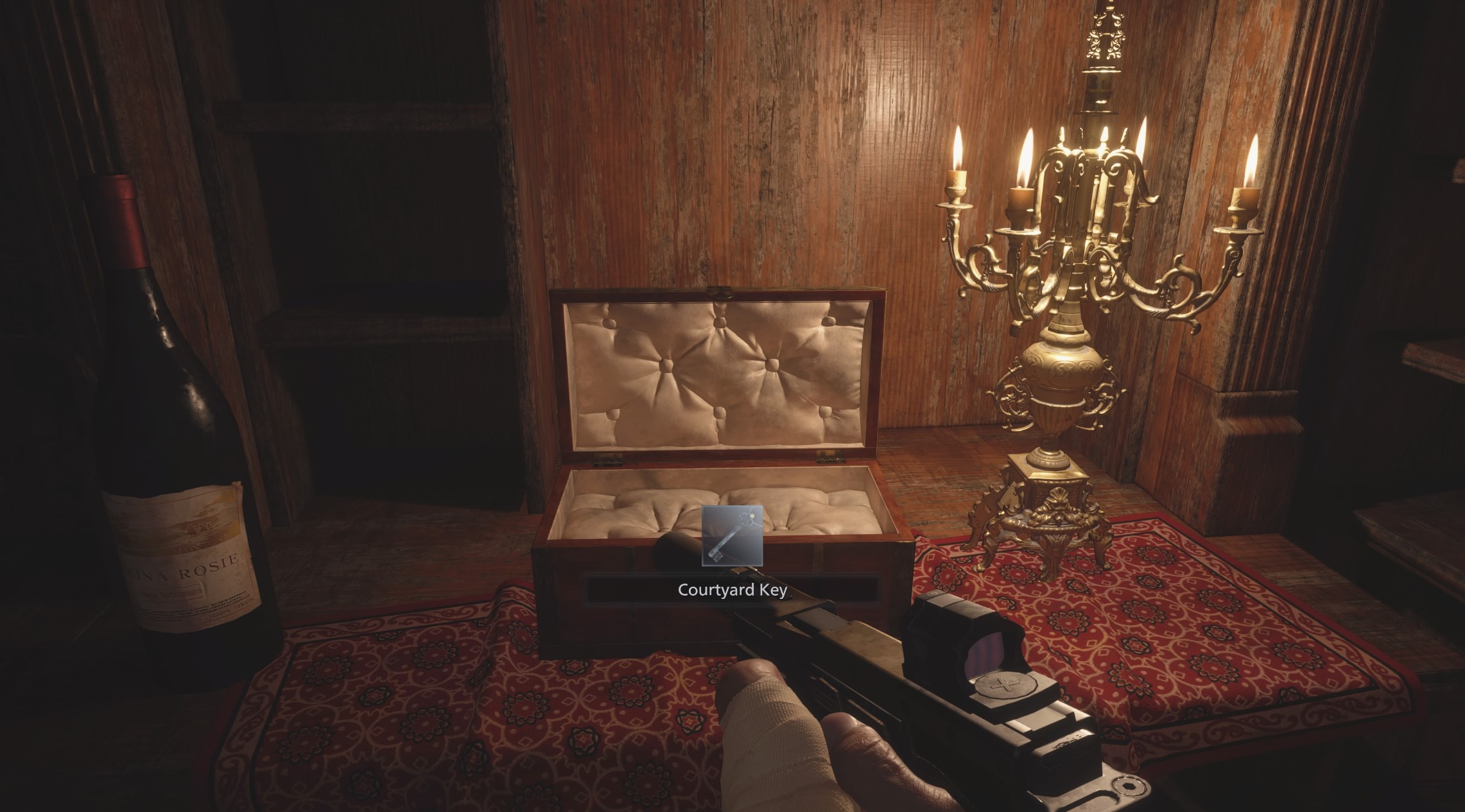 Return to the Dining room through the main hall and open the courtyard door. 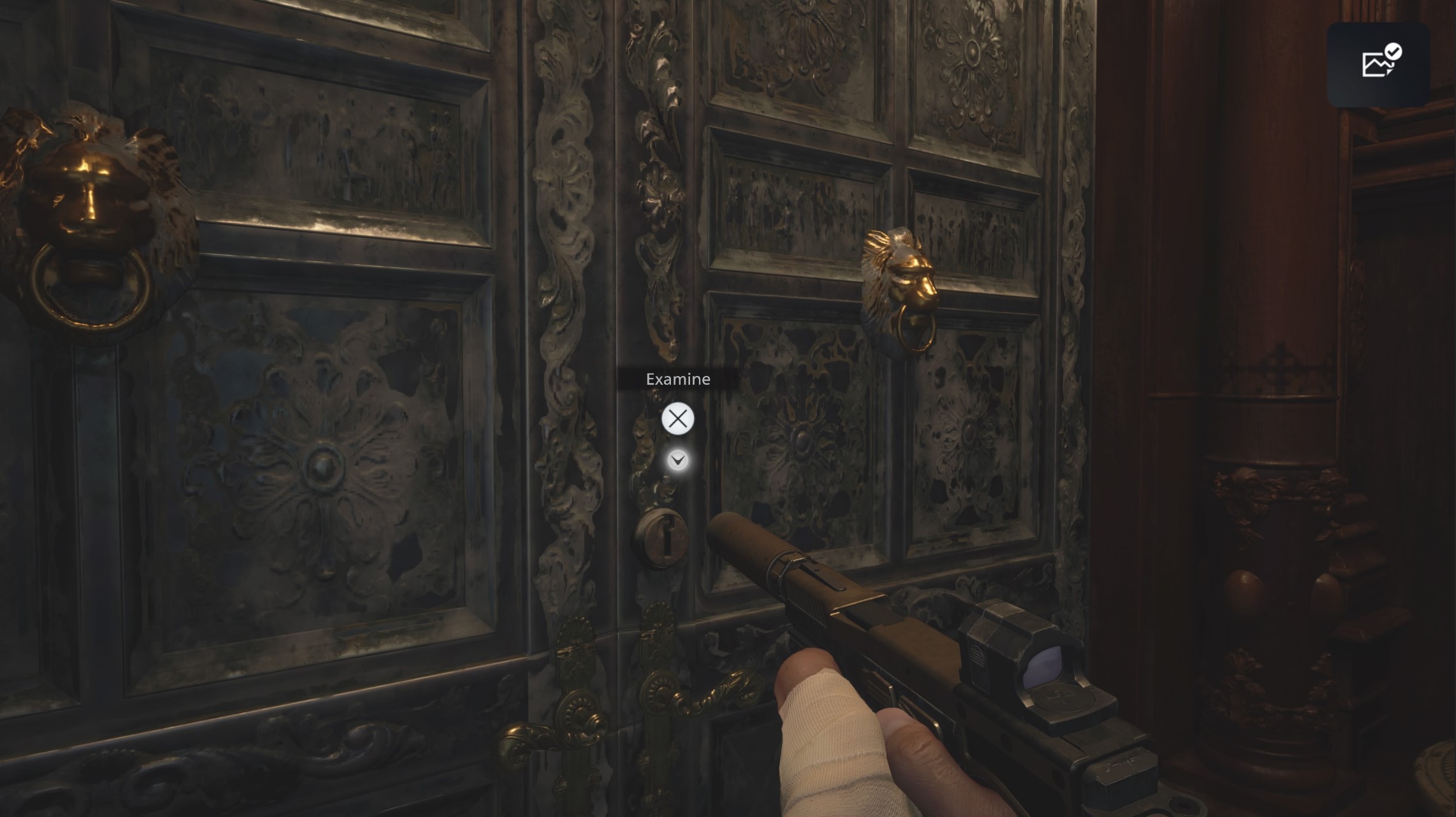 If by any chance you meet anything on the way, back off to give yourself some room, then sprint towards the courtyard door and fresh air. 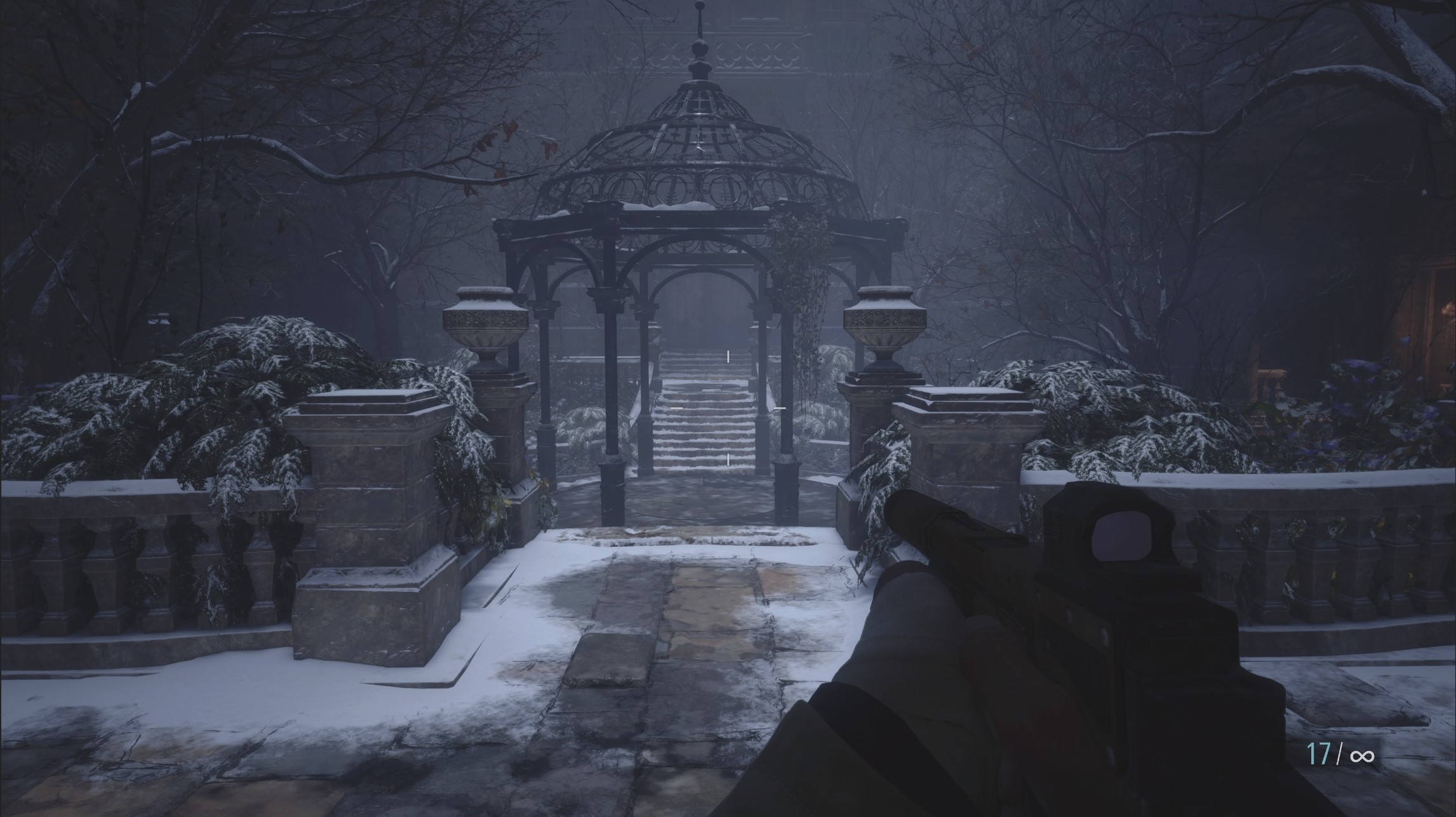 To advance, go through the door in the top right corner. 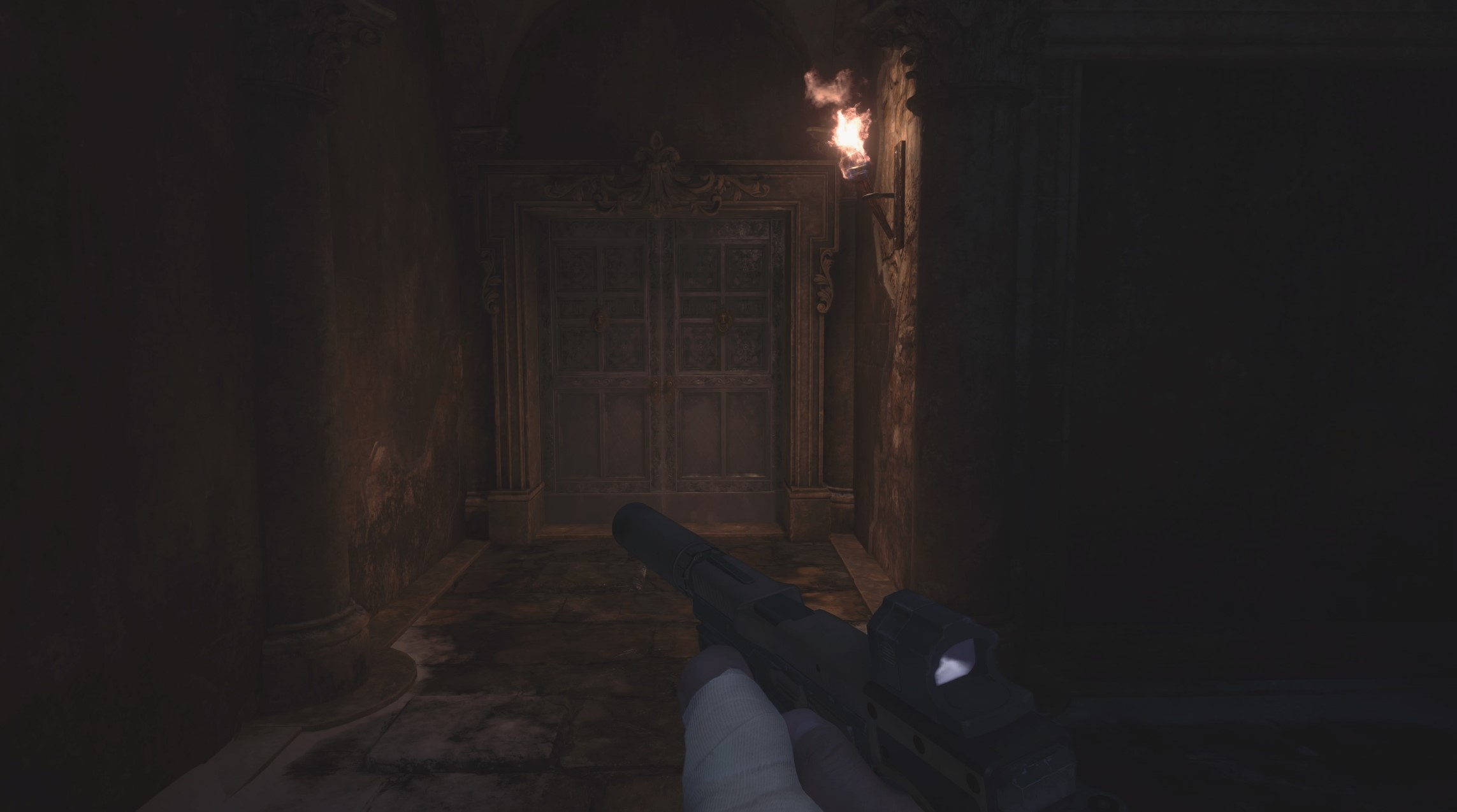 In this foyer, there’s some chem fluid in the drawer on your left, then creep up the stairs.

There’s an urn full of bullets on the right at the top, then go through the door on the landing. 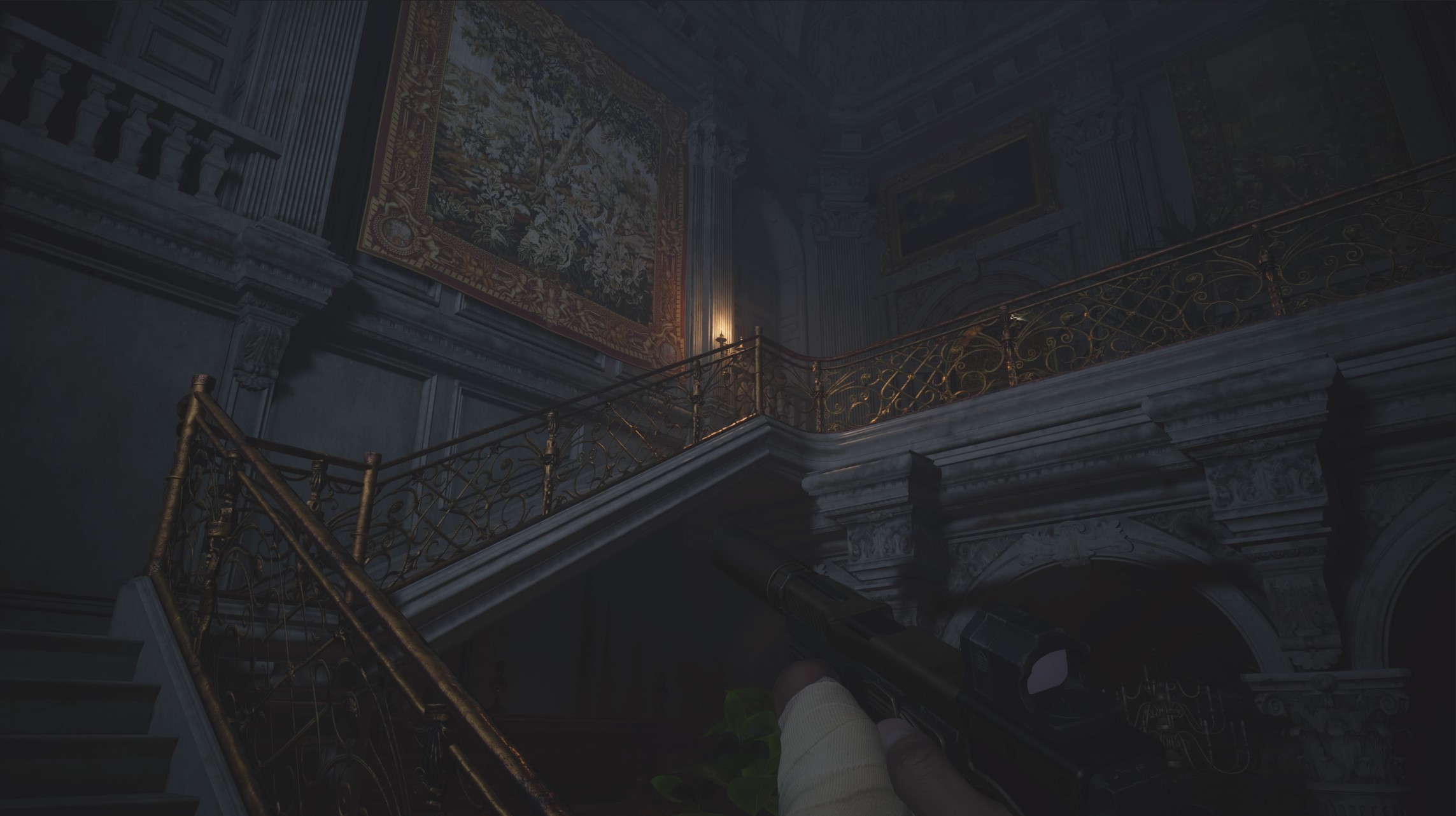 Take a left and continue along the corridor until you see a full map of the castle on your right. Pick it up and peruse at your leisure.

You’ll see that you’re on a floor with the Hall of Ablution, a terrace, and Lady Dimitrescu’s personal chambers.

Continue past the door to the Hall and there’s some more bullets to pilfer in the drawer on the left, but once you have those, return to that door and go inside to find a puzzle we’ll cover in the next part!