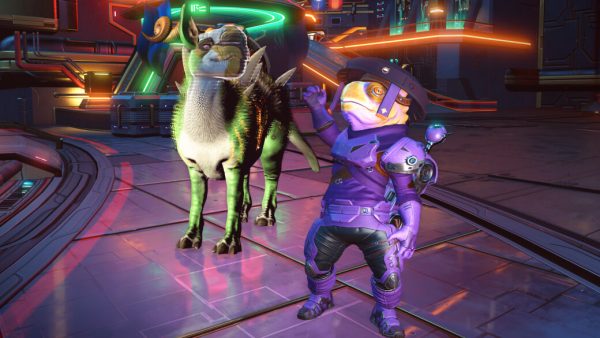 A new update is available for No Man’s Sky, making it even prettier.

The Prisms update is now available for No Man’s Sky, and it adds plenty of visual improvements.

You can expect support for screen space reflection (SSR) technology for PC, next-generation consoles, and Xbox One X. This allows starships and lifeforms to create reflections as they move, and lighting in reflective areas will feel higher quality and more realistic.

In the update, new styles of volumetric lights have been introduced, with colored and directional volumetrics used to add atmosphere all across the universe. Interstellar travel has undergone a “sensory overhaul”, with the audio and visuals of the warp experience dramatically reworked.

PC players with compatible NVIDIA RTX graphics cards can take advantage of DLSS, and caves and subterranean biomes are now even more alien and exotic as fungus and flora glow with new atmospheric lighting effects, and environments are more detailed and more diverse.

Players on next-generation consoles or PC players who use Ultra settings will also see a dramatic increase in planetary detail across a whole range of environments.

The team has added new parallax occlusion mapping technology in order to bring additional depth and definition to previously flat surfaces. Many textured surfaces in the Space Anomaly and planetary structures now appear more detailed. Also, hazardous weather events such as meteors or lightning impacts now have a chance to spawn valuable objects, creating opportunities for those who want to brave extreme planetary conditions.

New lighting technology in the update brings refractions to the game, and the new effects can be seen all over the universe, including on glass base parts, starship cockpits, forcefields, alien bubbles, and more.

The UI for the Appearance Modifier has been refreshed for a cleaner and clearer customization experience, and the range of creatures that can be adopted has been increased. Fur has even been added to various creatures.

Additionally, the variety, quality, and number of stars in the sky have been significantly increased.

Hello Games has also made it so when purchasing a new freighter your existing freighter base is automatically transferred and reconstructed. In addition, freighter base layouts can now be reset at any time from the Freighter Upgrade Control terminal.

Photo Mode now has a significantly improved depth of field quality and controls, as well as now giving you manual control over bloom settings.

There’s plenty more to digest in the update, and you should catch up on everything new through the latest blog post.

Ghostrunner leaps onto PS5 and Xbox Series X/S in September