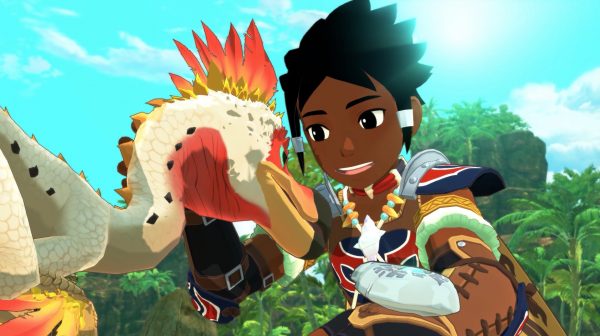 As a spin-off set in the Monster Hunter universe, Stories 2 caters to both new and experienced riders and hunters alike.

You play as a young rider, grandchild to a legendary hero, and begin a quest to hatch a rare and powerful egg that comes under your protection.

It’s up to you to prove your worth, showing many traits your grandfather possessed and developing your kinship with “monsties” at a rapid pace – can you stop any doubt people may have about your talents?

This is a great set up to what is a grand adventure, mixed in with combat that’s accessible on the surface, but can get deep for those who would like to, which makes for an engaging and chunky RPG that lasts a lot closer to 40+ hours playing casually than the 25 or so I thought it would going in. 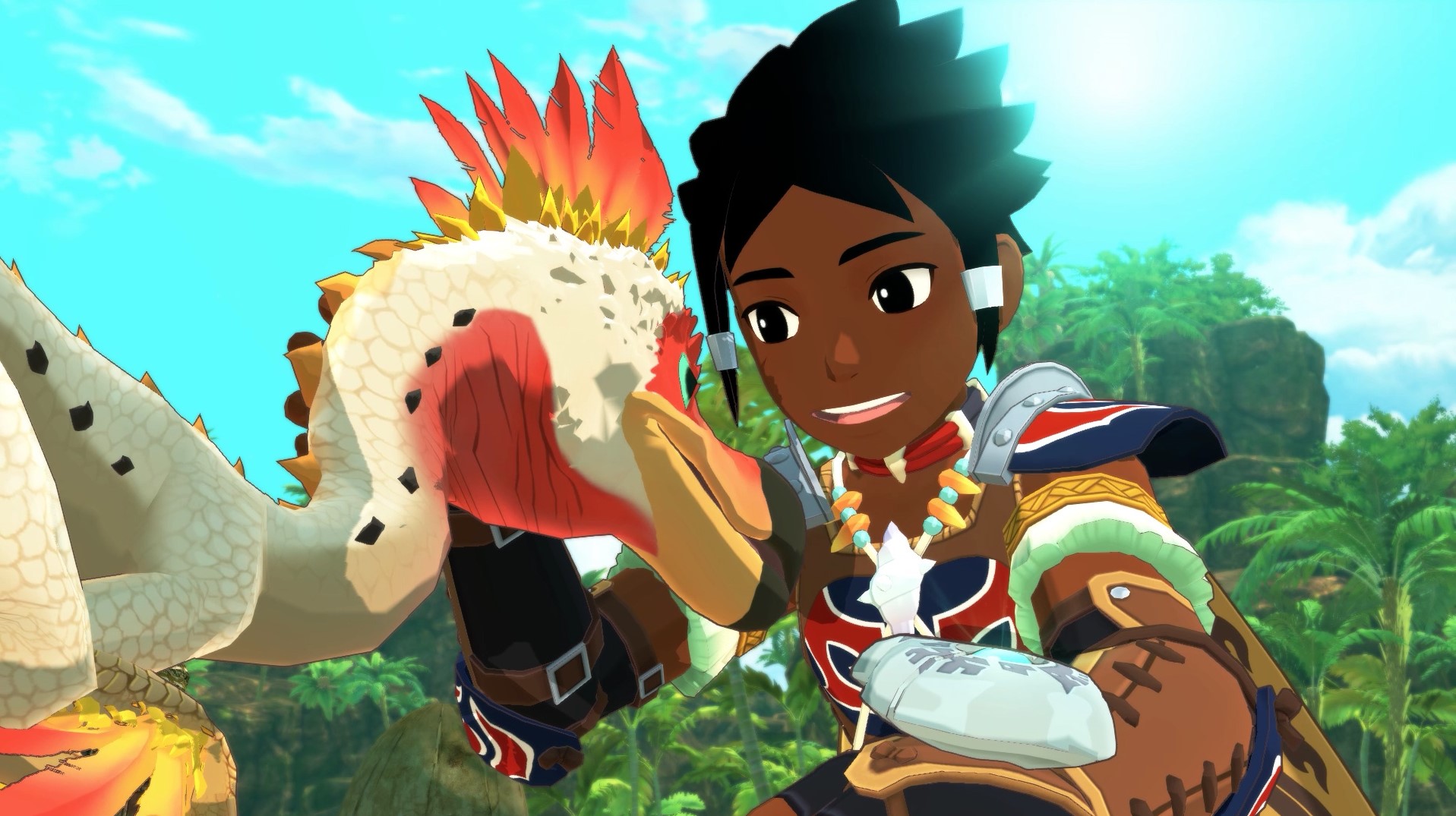 You and your team of up to six monsties face off against the wider roster of Monster Hunter monsters in turn-based fashion where you’ll take advantage of three attack types in rock-paper-scissors style match ups. Of the three attack types, Speed beats Power, Power beats Technical, and Technical completes the cycle by beating Speed.

As you fight and land attacks your kinship gauge will fill. You spend this kinship by using your weapon and Monties skills or if you let it fill up you’ll be given the option to ride your monster and let loose a devastating kinship attack.

Your weapons and monsties also have strengths and weaknesses. For example the nine weapon categories fall into three different weapon types – Slash, pierce and blunt – and there is no one weapon that beats all. You’ll be constantly switching to focus different monster body parts and then there’s the element of your weapon and monsties you’d be wise to take note of as well.

While having a different combat style to the mainline Monster Hunter games is sure to be controversial, a lot of the same principles apply here and I loved the feeling of familiarity coupled with new combat features. 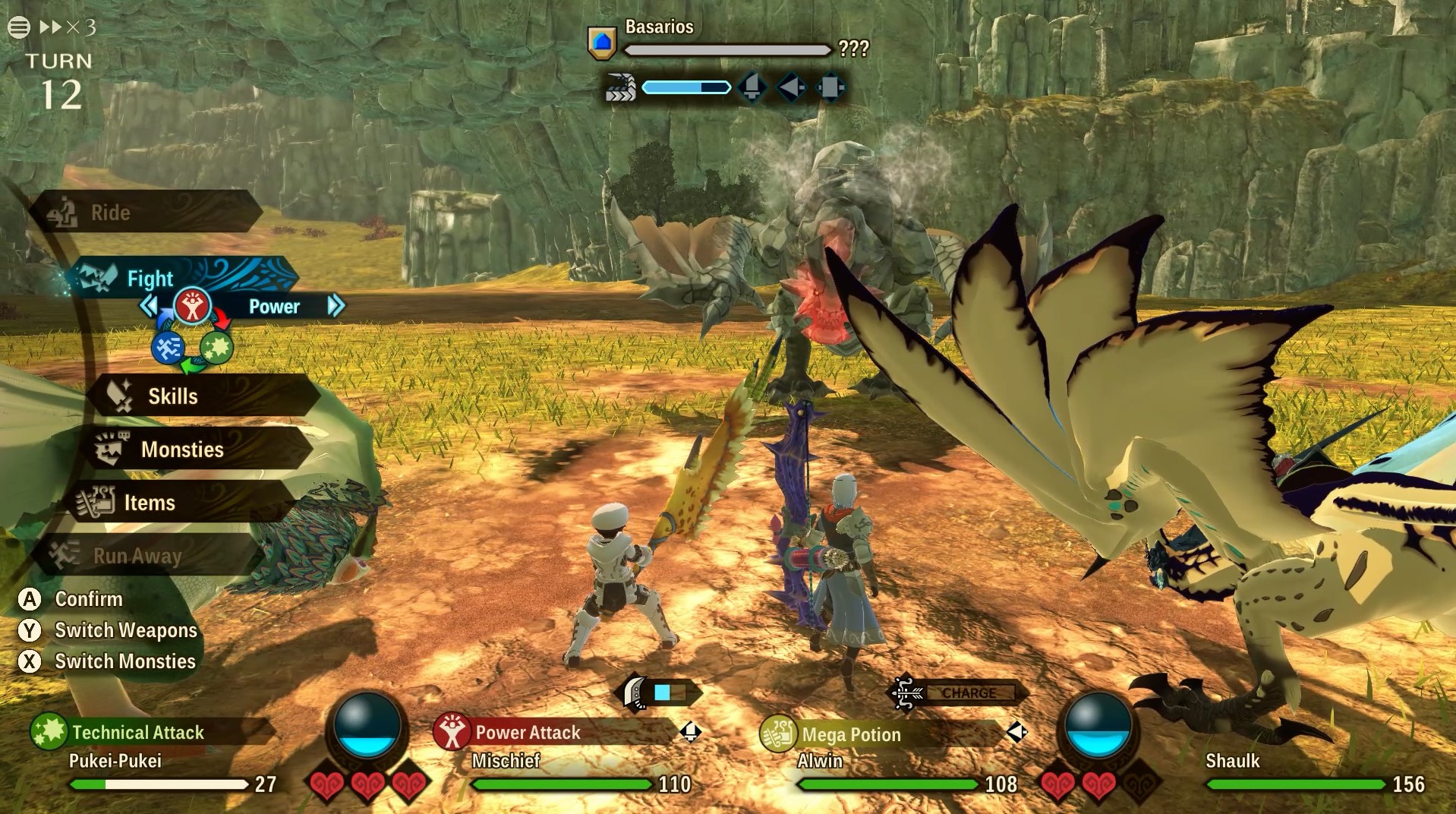 There are dual attacks, dual kinship attacks, quick time events to strategically employ, while monsters consistently swapping their attack types means there is a lot going on in battle to keep you on your toes.

One issue is that the combat does start off fairly easy – a little too easy – and I don’t think I actually even healed during a battle for the first 7-10hrs. But I got my swift comeuppance when I stumbled across a monster in the wild that one shot my whole team almost immediately.

Up to that point, I thought the game was going to limp along in easy mode, but that moment made me want to continue playing even more, knowing that there was an actual challenge waiting for me gave me an incentive to get stronger.

So how do you get stronger? In the traditional Monster hunter way of course, by slaying monsters. After every battle you’re given a rank based on the kinds of special conditions you’ve completed, like breaking body parts or using particularly flashy moves. The higher the rank, the more materials you’ll be rewarded with to pour into crafting weapons and armour.

Unlike the mainline series, armour is streamlined into one whole set. With only a few skills to take into consideration rather than the heavy customisation of Monster Hunter Rise or World. These limited options can feel a bit lacking, and feel like you’re just progressing up one linear path without much experimentation. However, it’s understandable since there’s such a reduced focus on skills in general.

Crafting your build isn’t the final word in your overall power because you’re not the only one who needs to get stronger – your monsties are your pride and joy and do a lot of the heavy lifting.

With over 81 to choose from there is no shortage of variety once you get past the stodgy early game, but you’ll quickly find your favorites. You get monsties by entering dens and collecting the eggs from their nests with the best eggs being found within the rarer golden dens.

Eggs are graded by their smell and weight – assessed by your cat compadre Navirou – with heavier and better smelling eggs possessing the best genes and stats, all the way up to the most sought after rainbow genes. 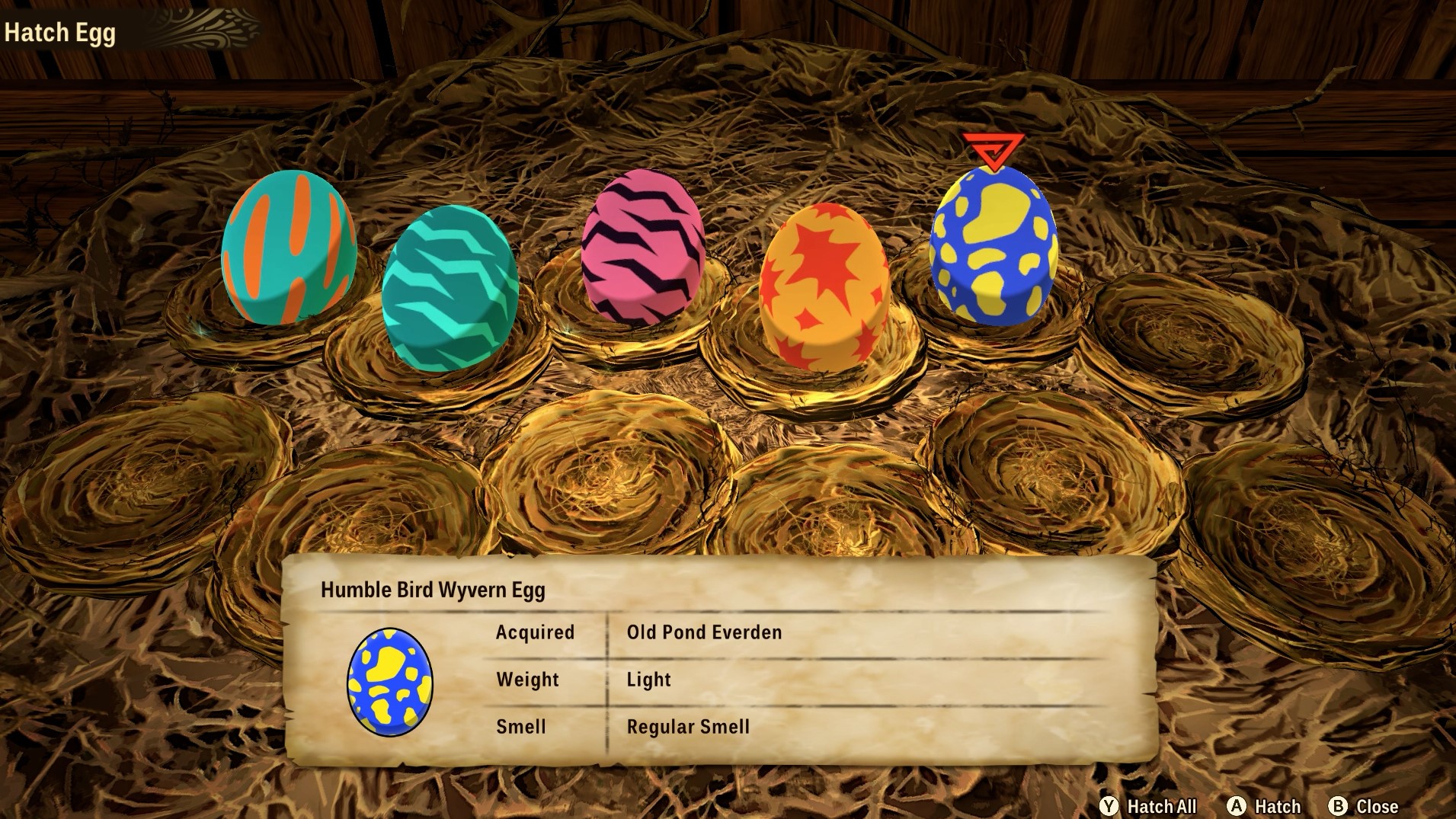 It’s a complex system, and a trip to the stables will be required once you’re ready to hatch your eggs to see what stats, skills and genes your monstie has rolled with.

Whenever RNG is involved you get the same loot-box-like hit of dopamine when you snag what you actually need, but it does feel like a lot of grinding involved to unlock a monsties true potential. Despite that, the stables is where a lot of players will find a great amount of fun, and spend an even greater amount of time customising their monstie party.

This wrinkle makes the gene system a lot simpler to understand and rewards players who hunt for loads of eggs and dive deeper into the bingo bonus system – where you match genes of the same colour or attack type on the grid to strengthen monster pals – even further.

The in-game explanations aren’t the best, and if this looks confusing don’t worry, I was around 20hrs in when I started fiddling around with the Rite of Channeling properly and if I’m honest I probably could have gone a little further without using it. If you just want to experience the story, all of the small details can be left to the min-maxers and won’t get in the way of your enjoyment.

Something that might mar your time in Monster Hunter Stories 2 however is the less than spectacular Switch performance.

On PC it runs silky smooth as expected, with a certain location even rivalling that of Monster Hunter World, and if you’re someone who needs to play at higher frame rates and resolution – PC is the way to go. 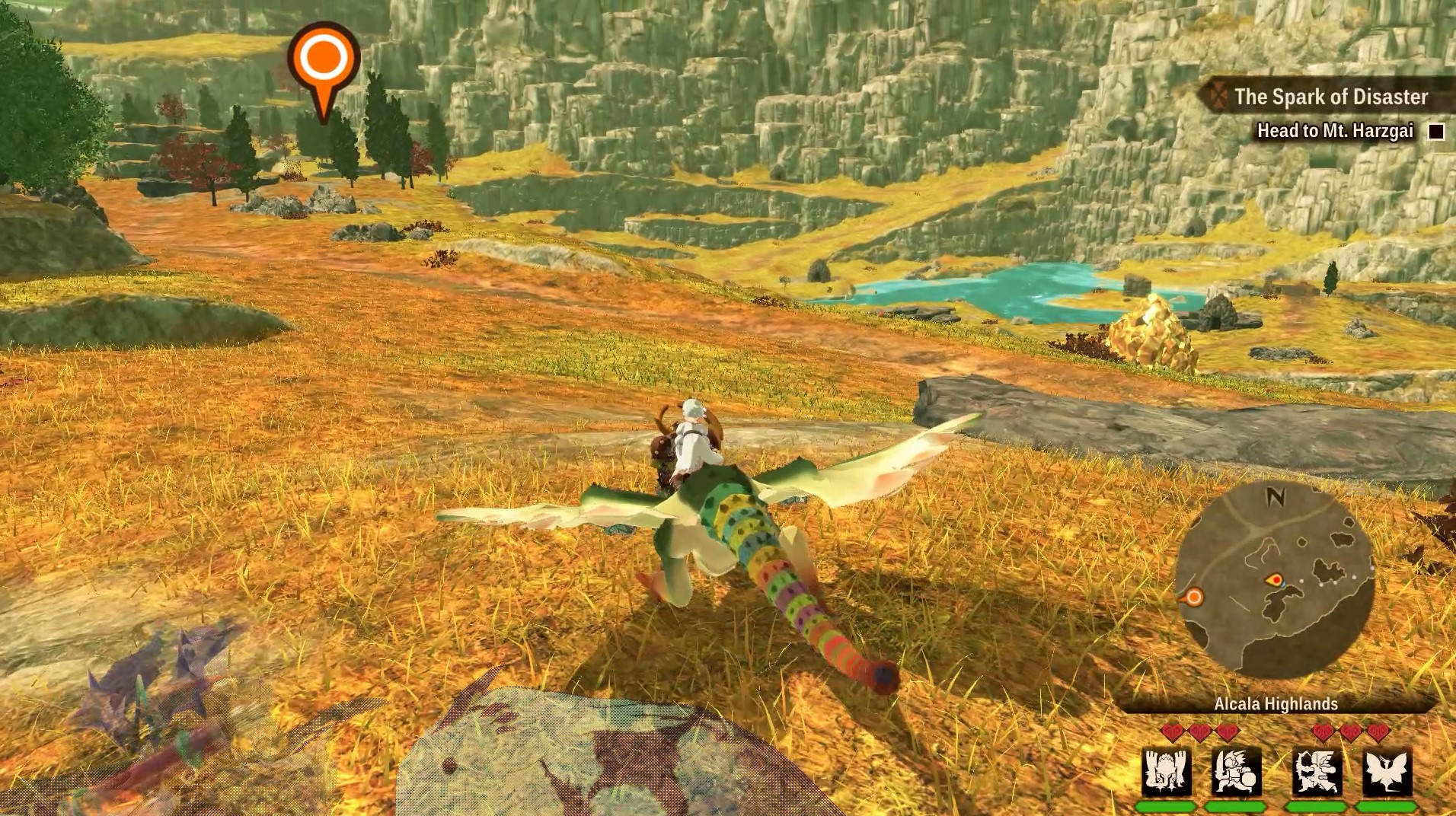 But games like this are very well suited to the portable console, so much so that I wouldn’t blame you for overlooking performance in favour of accessibility.

The choice of presenting the narrative in-engine is a brave one, and you could argue that this is a more ambitious Monster Hunter game on Switch than Monster Hunter Rise because of it.

But even though the human characters in cutscenes in Stories 2 feel a lot less static than we’ve seen in the last few Monster Hunter games, the Switch struggles to animate the movement and chugs pretty hard throughout a lot of the game.

As well, there are so many more environments here than in Rise, that it seems like they just couldn’t have the same level of detail. Many of the textures are muddier than a Barroth’s wallowing pit, so a lot of the unique areas still feel very samey, and backtracking through them is a massive drag and easily the worst part of the game – but thank God for fast travel.

Outside of the main quests, there’s so much more to do. If you’d rather relax and do some side content there is no shortage of it, Bounty Boards make a return and NPCs have some more narrative driven quests.

If you’d like to partner up with a friend to hunt some eggs that’s also a possibility in Co-op, or you can prove who the best rider is in PVP. As you reach the end game, nearly all of the game’s systems are expanded upon and completing the whole story can take anywhere from 30+ hours and the side content and endgame can take you all the way up towards the hundreds of hours.

Monster Hunter Stories 2 is a win, with so many quality of life changes from its predecessor on 3DS. It’s welcoming and accessible, familiar yet new, complex but not too confusing, and has plenty of surprises waiting for players and I can see myself playing it way beyond this review.

Monster Hunter Stories 2: Wings of Ruin soars onto Switch and PC on July 9. Tested on PC and Switch, code provided by publisher.

The post Monster Hunter Stories 2: Wings of Ruin Review | Turn-based for what appeared first on VG247.