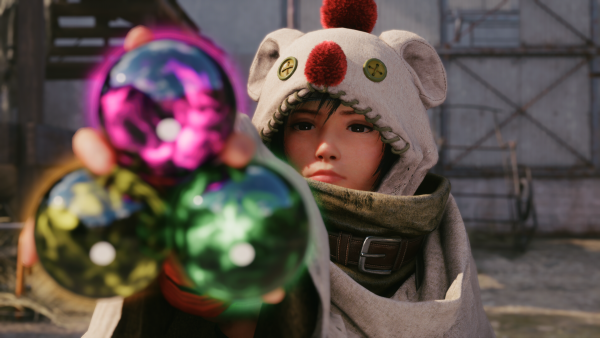 Yuffie’s new adventure is a fun romp, though only existing fans need apply.

People talk a big game about the cast of the original Final Fantasy 7. As they should; the cast is excellent. But one of the best-developed members of the cast is Yuffie – who quietly builds out a unique and memorable presence despite being an optional party member who as a result has much less to do with the thrust of the main game’s story.

In the original FF7, Yuffie is encountered at random on the world map, with the likelihood you’ll run into her increasing dramatically the deeper into the game you get. It’s ultimately quite likely you’ll recruit her because of this – she’s less easily missed than Vincent, the other optional party member. She has one major side quest dedicated to her and a smattering of reactionary dialogue if she’s in your party for certain scenes – but that’s it. Despite this, she’s one of the strongest characters in the whole game.

I’ve always theorized that Yuffie is probably one of FF7 Remake director Tetsuya Nomura’s favourite characters in the world of FF7. She and Vincent were both almost cut from the game, but it was the intervention of Nomura that helped to ensure they survived as party members, albeit pared-back and optional ones. Later, he’d give fresh life to the pair in Dirge of Cerberus in particular, while Yuffie went on to have a role in Kingdom Hearts. Now, she’s been chosen to usher FF7 Remake onto the PlayStation 5 with Intermission, a new story episode available exclusively for FF7 Remake Intergrade, the newly released PS5 upgrade of the game.

The solid foundation laid by the original FF7 proves most helpful here – and as a result, Yuffie is immediately a fully-realized, lovable character. There’s excellent voice work in English from the newly-cast Suzie Yeung, and Yuffie is generally animated with the same love and care as the other core characters in the Remake, which happily boasted low-key PS5 characters in the original PS4 version. 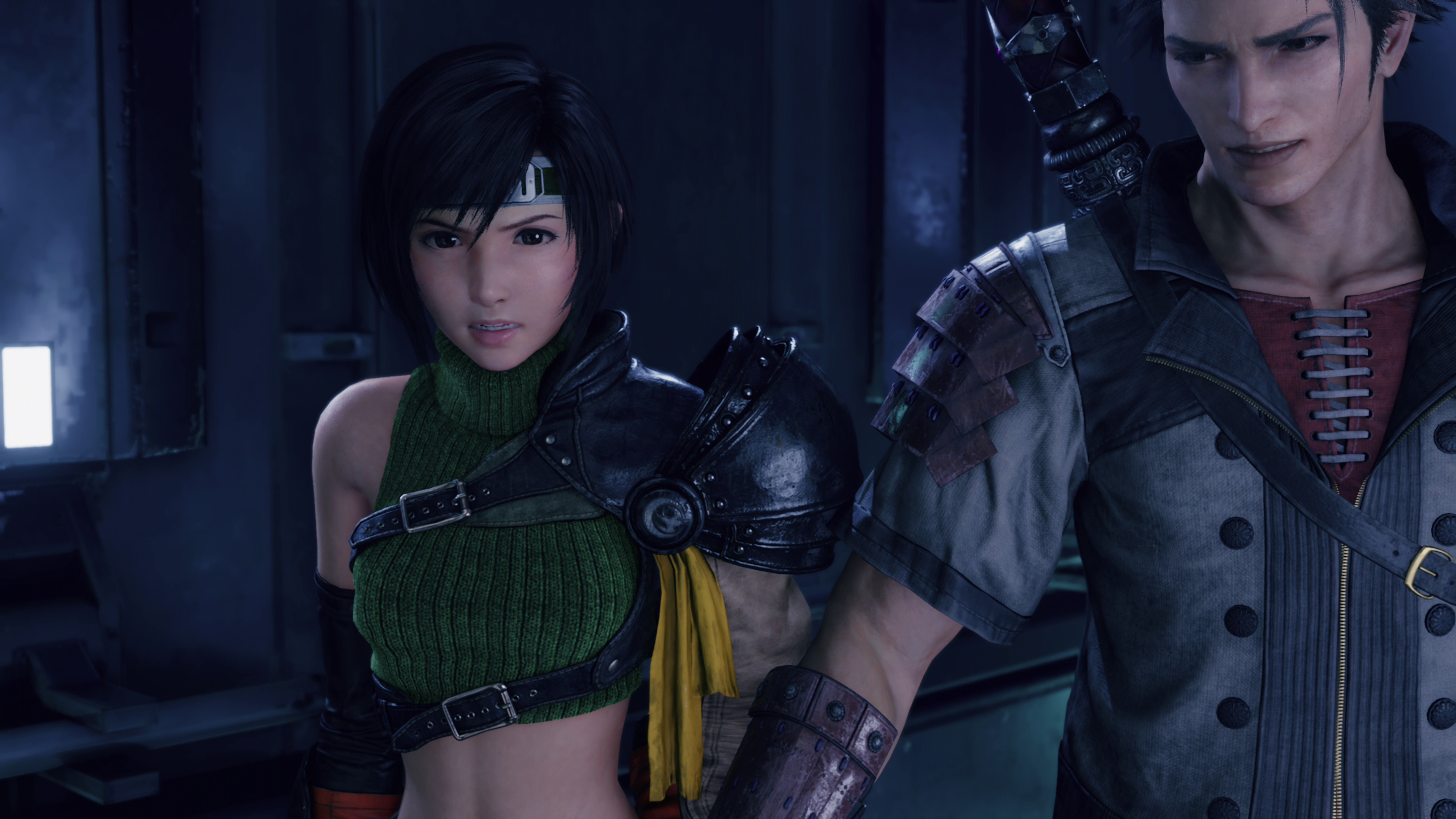 The upgrade is available for free if you purchased the original, though you’ll need to buy the Yuffie episode separately if you enjoy the free upgrade. If you buy the new PS5 version, Yuffie’s adventure is included. It’s a stand-alone affair accessed from the main menu, and is entirely closed off from the rest of the FF7 Remake experience.

Seeing Yuffie in this way in a new story is great fan service for the elderly among us who remember 1997, while newcomers will find this a thrilling introduction to a fun new character. She’s a great mix of funny, smart, a little dumb, and surely in over her head. She’s quite unique in the FF7 cast, even if she is also a bundle of JRPG tropes.

Regardless of which side you play, both the original game and the new chapter benefit from the various PS5 upgrades. To be honest, it’s a fairly modest upgrade, and your mileage will vary hugely from one chapter to the next. Areas like the Mako Reactors are now thick with new fog and improved lighting, but places like the slums still feature almost embarrassing, blocky geometry around the edges. Textures have been improved (the infamous door is fixed), but in many cases the clearer textures only serve to highlight the ways in which FF7 Remake was deeply visually uneven to begin with.

The game’s ups and downs have always been best summed up in the character models, where somebody like Cloud or Yuffie – PS5-quality character models with incredible detail and surprisingly soulful eyes – interact with shopkeepers or NPC quest-givers who genuinely look like they were left-over models from Final Fantasy 13. Intergrade looks great, but go into it understanding it does not address these issues. The highs are higher, and the lows are… a little less low. That’s the deal.

You can choose between a performance mode, which gives a 60 frames-per-second presentation while sacrificing resolution, or a graphics mode that offers full 4K with a lowered frame rate. Both are serviceable and valid choices, but I think FF7 Remake’s excellent battle animation benefits in particular from the performance mode. Annoyingly, the game doesn’t seem to switch modes when you enter photo mode as some games do. Ideally, if you’re in performance mode and hop into photo mode, the game should re-render the scene in graphics mode while you take your shot. Intergrade sadly doesn’t do that. 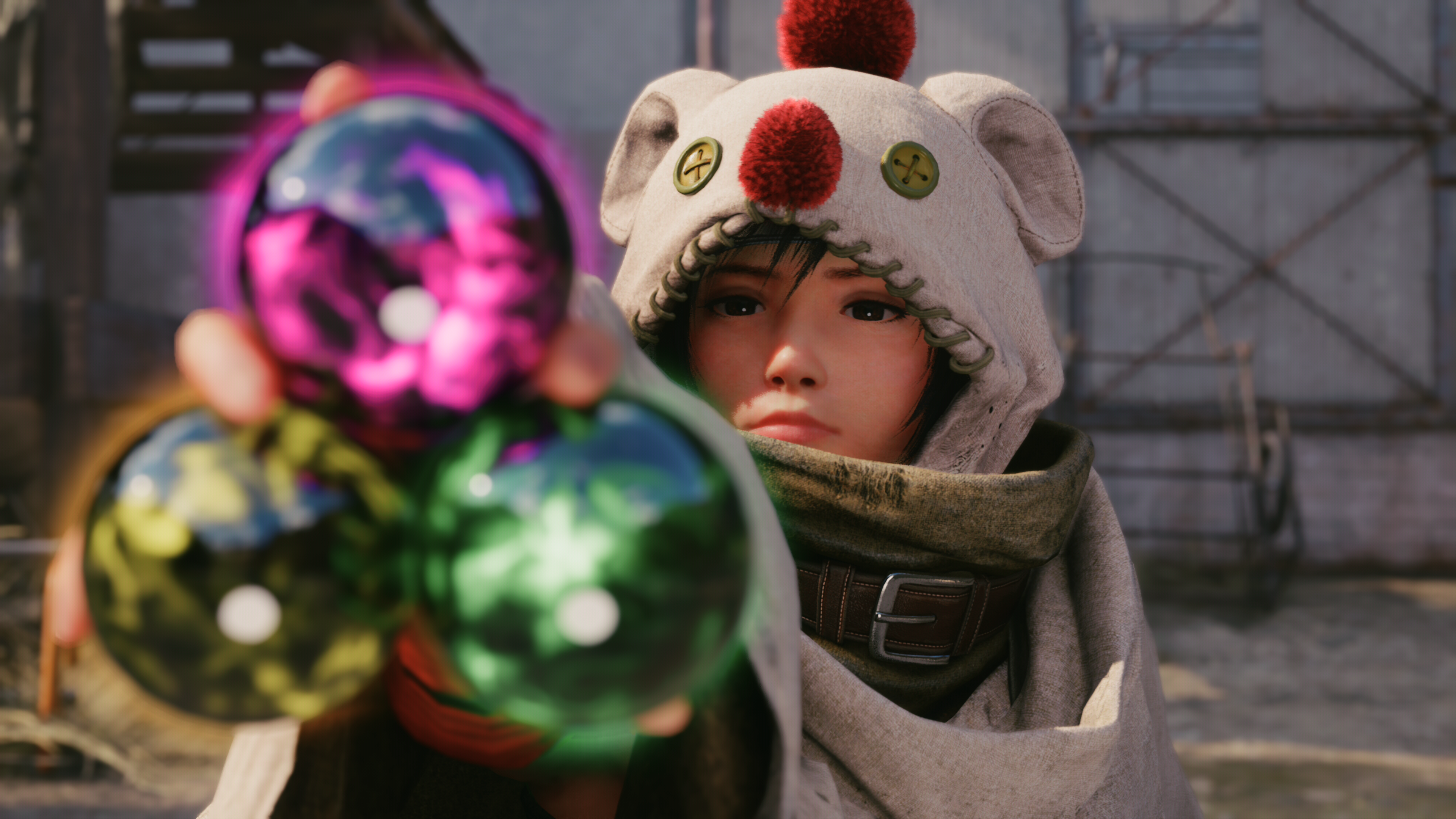 Anyway – Yuffie’s episode. It’s good. Functionally it’s two chapters long, and those chapters are broadly comparable to those in the main FF7 Remake. If you’re main-lining it, expect a quest that’ll take you three to four hours. If you do everything and stop to smell the roses, expect around six hours. Once completed, you can of course challenge it again on hard mode.

The first chapter is an ‘open world’ one, reusing the Sector 7 Slums area from the main game with some tweaks. Just as in the main game, there’s a couple of side quests to participate in throughout this area.

These side quests are honestly not much to write home about. One asks you to win games of the new Fort Condor mini-game, a light strategy thing that is a neat distraction. Another is a rubbish fetch quest. There’s also a VR battle that lets you unlock Ramuh as a summon. It’s all pretty simple and familiar, really.

There’s a lot of familiarity, in fact. Intermission is something of a masterclass in asset reuse, deploying lots of things from FF7 Remake in subtly different ways. With that said, there’s a lot of new story, many new cutscenes, and several major new bosses. In addition, Yuffie of course plays uniquely from the other party members, with a ninjitsu-based gimmick that is genuinely oodles of fun to experiment with.

Once the DLC is finished, there’s an enticing tease for the next game that’ll make fans have a meltdown, plus the unlocking of a bunch of new end-game combat simulator challenges for Yuffie – plus one new one in the main game. Yuffie’s adventure itself doesn’t have much implication for the wider story and lore – it’s eminently skippable, and if you can’t get your hands on a PS5 and have no intention of watching it on YouTube, know you can likely go to the next game without playing this without issue. FF7 lore nerds might want to play, however, as there are intriguing hints about the state of Wutai and how different it is in the Remake’s version of the universe.

That’s it, really. Intermission is not a major new addition, but it’s an engaging new story episode for those who couldn’t quite get enough of FF7 Remake and are salivating at the thought of the sequel. It’s not really essential playing, but if you enjoyed the original FF7 Remake, you’re sure to have a blast.

Minecraft: Axolotls | How to tame an axolotl in the Cliffs & Caves update