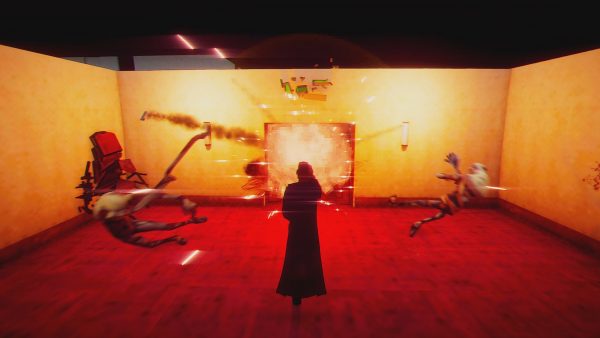 El Paso, Elsewhere was announced over the weekend, and feels like a mix of Max Payne and Doom – what’s not to love?

Announced during the Guerrilla Collective show on June 5, El Paso, Elsewhere intends to bring back the cool supernatural neo-noir third-person shooter, and it’s doing it in style.

As you can see for yourself in the trailer below, the new game sets you – James Savage, a gun-toting folklore researcher against Draculae, the Lord of the Vampires. You’ll have to shoot through all manner of werewolves, eldritch horrors, and peculiar demons in order to get to her, though.

Oh, and she’s your ex, too. Check out the debut trailer below.

“STAKES. GUNS. SLOW-MO,” exclaims an excited blurb for the game. “Fight werewolves and vampires in a reality-shifting motel. Dive through barricades to escape the grasp of evil puppets. Destroy the villain you loved. A new, third-person love letter to classic shooters. Neo-noir never looked so good.”

El Paso, Elsewhere is the brainchild of Xalavier Nelson Jr. and his studio, Strange Scaffold, and a team of collaborators. You may know Xalavier from another recent game, An Airport For Aliens Currently Run By Dogs, which came to Steam last month.

The game currently goes without a release date, but it’s due to launch at some point in 2022. You can check out the game’s Steam page at the link. If you want to trial preview builds of the title ahead of release, you can sign up to Xalavier’s Patreon.